Another big energy company is looking for a way to get its shale gas from northeastern British Columbia to the lucrative markets of East Asia.

At Monday’s Canadian Petroleum Producer’s investor conference in Calgary, Nexen announced it was looking for a joint venture partner to export the shale gas through a west coast port to Asia.
LNG World News reported:

Nexen wants to find a partner with expertise in producing and selling liquefied natural gas, said Marvin Romanow, chief executive officer. The Calgary-based company last month opened the books on its shale-gas resources for review by interested parties.
“We looked for folks with good contacts in LNG,” Romanow said

Nexen Inc. (TSX:NXY) is on the hunt for a partner to help develop its vast holdings in the Horn River Basin. LNG expertise would be attractive in a partner, but Nexen is open to a variety of marketing strategies for its gas, chief executive Marvin Romanow said.
“I think you want to think about treating your market access as a portfolio, not as a single killer strategy.”

So it is likely that Nexen and its prospective partners, whether from Asia or North America, will be next in line of “gentleman callers” making their way to Kitimat to check out Douglas Channel.

To use a theatrical and old movie analogy for a moment, Kitimat,  with its isolated location and the devastating closure by West Fraser of the Eurocan plant, up until this spring, the town was seeking big money corporate saviours in the same way as Tennessee Williams’ stricken, lonely Laura pined for a “gentleman caller” in The Glass Menagerie.
Now with the world wide gold rush in shale gas production aimed at the Asian market, Kitimat seems to be taking on a new movie role, the nice, plain, intelligent next-door girl that all the boys ignored until she suddenly comes in to an unexpected inheritance. Now all the boys are calling on her and so  are fancy guys from out of town. 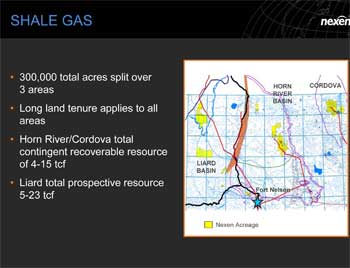 Nexen is a Calgary-based energy company, first known as Canadian Occidental Petroleum. It began with operations in the Alberta oil patch and later in the Gulf of Mexico.
In 1991, the company made a major oil discovery in Yemen and that financed later expansion into the Alberta oil sands,  deep water drilling the Gulf of Mexico and exploration in northeastern British Columbia shale oil.
At the  Calgary conference, Nexen said it wasn’t currently drilling any new wells in Yemen and was slowing maintenance of wells while it waits renewal of its contract with the government. Given the current unrest in Yemen, it may be a while before a new government is formed that can sign a new 50/50 contract with Nexen.
On shale gas, Nexen says on its website:

While we weren’t looking at shale gas five years ago, today we have captured significant resource potential-enough to double our current proved reserves-in the heart of one of North America’s best shale gas plays. We are improving productivity and driving down costs as we improve equipment utilization, drill longer wells and initiate more fracs per well.
Shale gas can be brought on quickly, fuels our short-term growth and complements the larger projects in our portfolio.

Webcasts from the CAPP conference

One thought on “Is energy player Nexen Kitimat’s next “gentleman caller?””