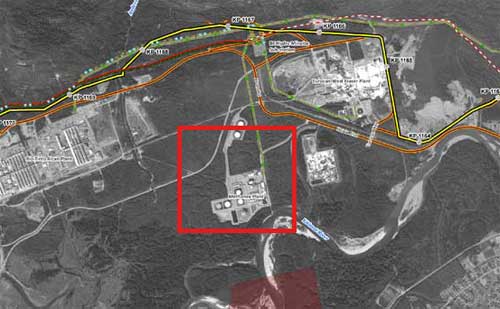 The former Methanex site is seen the red square in this map of the Kitimat service centre prepared by Enbridge as part of its Northern Gateway  pipeline proposal and filed with the Joint Review panel. The yellow line is the proposed Enbridge bitumen pipeline. The dark red line  is the proposed pipeline that would feed the Kitimat LNG and likely the BC LNG projects, where the red pipeline route has white, that is the Pacific Trails Pipeline.  See How Kitimat harbour will look if both Northern Gateway and KM LNG go ahead.

Kitimat mayor Joanne Monaghan has confirmed that Royal Dutch Shell has purchased the former Methanex site in  town, “as a first step toward a proposed Liquified Natural Gas facility in Kitimat.”

Monaghan said she met with Shell executives on  Wednesday afternoon, when the long rumoured purchase of the Methanex site was confirmed.

Both sites were owned by Cenovus Energy which purchased them in 2010  from Methanex  for a reported $40 million.

Monaghan also said that the Shell officials said the company will not be making an announcement of the details of their plans for another few weeks.

If the Shell project goes ahead, it will be the third liquified natural gas project in Kitimat.
The others are KM LNG partners’  (Apache, Encana and EOG) Kitimat LNG plant at Bish Cove and the smaller project from BC LNG.

The Methanex plant on the Kitimat river  permanently ceased methanol production November 1, 2005.  Methanex currently uses the Cenovus terminal in Kitimat to import
methanol to supply customers in western Canada. Cenovus uses the terminal and site to process condensate, used to dilute bitumen, that arrives by ocean tanker and then is shipped by rail to Alberta.

If the Methanex/Cenovus site is converted to a full LNG facility, current operations will have to be decommissioned first, Monaghan said.

Multiple sources in Kitimat have been saying for the past month that Shell had purchased the Methanex site, but official conformation only came from the mayor late Wednesday.