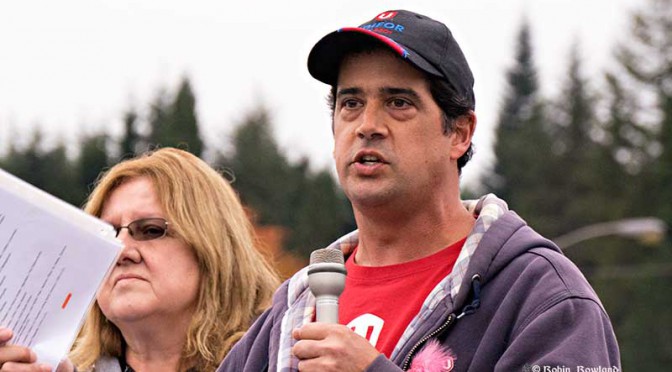 Members of Unifor 2301 rallied in front of the Rio Tinto offices at City Centre Mall in Kitimat, Wednesday, October 7, to protest against what they called “precarious work” and health and safety issues at the Rio Tinto BC Operations aluminum smelter.

O’Driscoll said that the list of grievances between the union and management are growing and that instead of trying to solve the grievances, RIo Tinto has filed a grievance of its own claiming the union has filed too many grievances.

The main reason for the rally was a worldwide protest over what the union calls “precarious work,” the use of short term, usually poorly trained workers,  what most industries call call “casuals” to save money.  The other issue at the protest was increasing contracting out.

O’Driscoll also pointed to the controversial issue of increased sulphur dioxide emissions from the upgraded smelter. Unifor has joined environmental groups in a successful court challenge to  the BC  Environmental Assessment Agency’s approval of the emission plan.