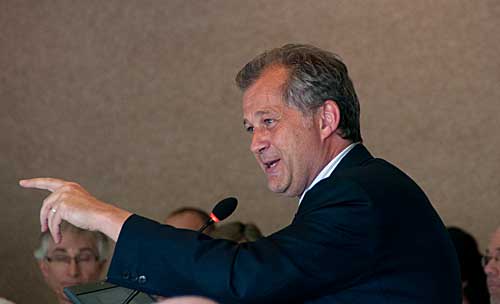 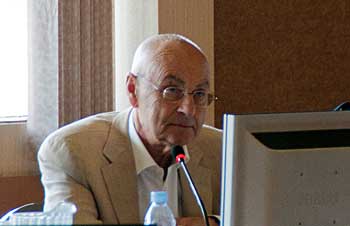 Priddle replied by giving Janes a lecture in economics,  saying  that while the advantages or disadvantages for First Nations were beyond his expertise, as an economist he felt that if  Janes that  had an interest in the welfare of his First Nations clients and their social development, it also should extend to other First Nations groups in both British Columbia and Alberta. “As an economist,” Priddle said,   “I tend  to follow the ‘present value princple,’  he said, explaining that it is best if a person gets a job now,  “the person who is not employed in 2012 and 2013 but will get some employment in the future… that native looses the five years” and “so there is  much less economic  value”  for that individual person.
“What is the benefit taking the project now, taking the development now?” Janes asked. “If we do this rigorously, what are the costs imposted on the aboriginal person? I suggest that proper economic analysis requires both sides of the equation.”
Priddle avoided that question, saying to Janes. “you are moving away from my evidence.”
With that, Janes had finished his questioning and the hearings broke for lunch.
Most of the afternoon was concerned with questions over the future of an integrated North American natural gas market and how, in the future, Canadian natural gas might be exported not just to the United States but through the US to Asia, while at the same time American natural gas could be imported into Canada to service some markets.
As the day closed, in the heat of the afternoon, and as many were anxiously looking at their watches as the clock neared the time for the puck drop for the fourth game of the Stanley Cup finals between the Vancouver Canucks and the Boston Bruins in Boston,  Mercier called on Nettleton to ask any redirect questions to Priddle and the rest of the panel.
Nettleton seized on the scenario that it was possible that Alberta natural gas could be exported to Asia through a port on the US west coast.
“If KM was not allowed to proceed, and the potential outlet was in the United States, how do see that as advantageous to  [BC] First Nations?” Nettleton asked Priddle.”Objection!”  Janes was on his feet to protest: during the cross-examination, Priddle had indicated that the advantages and disadvantages had moved beyond the evidence in his written submissions.
“What’s good for the goose, is good for the gander,” Janes told Nettleton. “This is completely out of bounds,”  because Janes had not been able to examine Priddle on the question, it was not proper rexamination, it was outside of the evidence.
“I have asked if Mr Priddle to comment,I have not asked for an opinion whether there would be costs or benefits for First Nations that would  be affected by Kitimat LNG,” Nettleton said.
“That is the question I am objecting to,” Janes replied.
After some more arguments, Mercier concluded that a comment and an opinion were pretty much the same thing and the hearing adjourned. The participants fled to watch the Bruins trounce the Canucks 4-0 and the stage was sit for more clashes on Thursday as the more substantial expert panels face the lawyers.