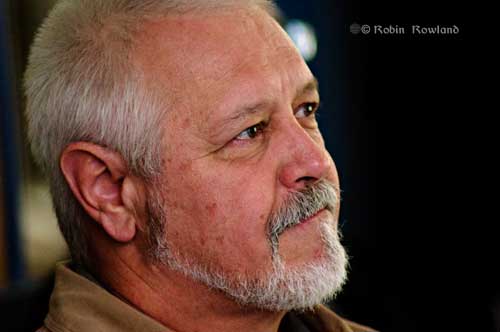 District of Kitimat councillor Randy Halyk, seen here at the local Jack Layton memorial on August 27, 2011, will be defending Kitimat’s resolution on halibut quotas at the Union of BC Municipalities convention.   (Robin Rowland/Northwest Coast Energy News)

Kitimat is taking the fight over halibut allocation to the Union of British Columbia Municipalities convention to be held in Vancouver September 26 to September 30.

The resolution is one of two that the union will consider on the halibut controversry, the other comes from the Capital District on Vancouver Island,

Members of the District of Kitimat council will be at the convention to sponsor and defend the resolution.

The Kitimat resolution calls on the union to endorse:

Whereas the current federal allocation of the sustainable Pacific halibut resource is insufficient to provide reasonable catch and possession limits for the recreational and commercial sport fishery;

And whereas an increase in daily catch and possession limits would be of great benefit in attracting sports fishing tourists to coastal communities.

Therefore be it resolved that the UBCM support an increase in the allocation of the sustainable Pacific halibut resource to the sport fishing and requests that the federal Ministry of Fisheries and Oceans increase the catch limits to two per day and four in possession.

The resolutions committee notes that British Columbia did express “support for the sustainability of both commercial and recreational fisheries in tidal waters.” The province apparently “highlighted a number of its activities related to ensuring fisheries sustainability and maximizing the economic and social benefits.”

The somewhat stronger resolution from the Capital Region did not receive an endorsement from the Association of Vancouver and Coast Communities and a “no recommendation” from the province wide resolution committee. That resolution says, in part that the allocation between the recreational and commercial sectors in the Canadian halibut fishery during years of low abundance will destroy the economic viability of coastal communities and deny Canadian citizens access to the common property resource of halibut.

It calls for a “more fair and equitable approach that would allow the recreational and commercial fishing industries to survive during years of low annual quotas,” it calls for the federal government to purchase or lease halibut quota from the commercial sector (rather than having the recreational sector purchase individually as the current Department of Fisheries and Oceans “pilot project” calls for) so that the recreational sector has a “permanent base limit,” that the season be guaranteed from February 1 to December 1 each year and that the limit be one halibut per day, two in possession. (The Department of Fisheries and Oceans stopped the recreational halibut season as of midnight Sept. 15 while allowing the commercial season to continue).