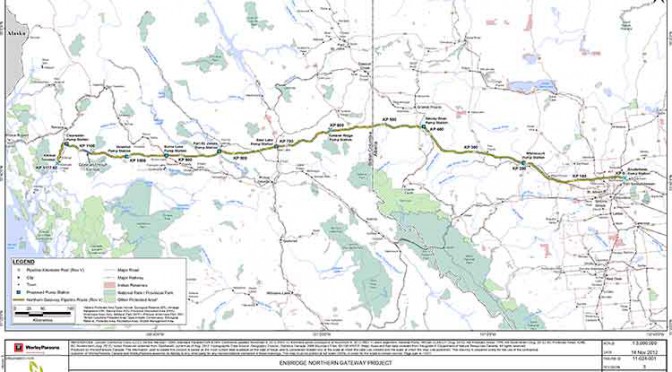 Court challenges and rising costs will stall the Northern Gateway project for most of 2015, Enbridge says in its Fourth Quarter (2014) Strategic Update, released Friday. That means if the Northern Gatway project actually goes ahead, the company now says it will not be completed until at least 2020 or 2021.

The strategic planning report also contains cryptic references that Enbridge may be planning a second pipeline project to the “west coast” possibly to carry LNG, that could also be completed by 2020 or 2021.

Editor’s Note: Some readers have pointed out that the obscure reference to the second pipeline to the west coast might also refer to the proposed twinning of the Kinder Morgan pipeline to the Lower Mainland.

Enbridge executives made no direct references to Northern Gateway during the conference call marking the release of the company’s 2014 results, nor did financial analysts nor media participants ask any questions about the Northern Gateway, an indication, that for now, the controversial project has dropped off the media and financial radar.

As for a possible new Enbridge pipeline to the British Columbia coast, the strategic planning report notes:

Based on the prospect for higher global LNG demand, the large resource base in western Canada and the changing North American natural gas flow patterns discussed above, there is an increasing probability that additional projects to export LNG from the continental United States or potentially off the west Coast of Canada will proceed. However, a sustained period of low crude oil prices or other changes in global supply and demand for natural gas could delay such opportunities.

Then in the conference call, Guy Jarvis, Enbridge president of Liquids Pipelines, made this reference to a slide that projected Enbridge’s future earnings.

In our base case, which is the green line and which we discussed at Enbridge Day, Keystone XL is in service in 2019 and Energy East plus one of the two West Coast projects is in service in 2020. In this scenario, we are currently chockablock full and we remain full as we bring on the two faces of Alberta Clipper expansion capacity and as we squeeze the last bit of capacity availability out of our system leaving about 200,000 barrels a day of capacity that we can’t get at due to upstream bottlenecks and crude slate versus line allocations.

So that means Enbridge expects one of  two West Coast projects to be online by 2020. One, of course, is Nothern Gateway, the second, perhaps a LNG project now on the drawing boards in Edmonton. If, however, the reference is to Kinder Morgan, that too may be delayed by opposition to that project. Sources indicate that pipeline companies often have various scenarios and plans on backburners that may be activated if market conditions are favourable.

As for Northern Gateway itself, Enbridge’s report on the project is buried deep in the  strategic review, after almost every other project and pipeline the company is working on.

Enbridge begins by noting the history of the twin 1,177-kilometre (731-mile) pipeline system from near Edmonton, Alberta to a new marine terminal in Kitimat, British Columbia. It then mentions the pipline would carry “crude oil for export” from the Edmonton area to Kitimat, fudging that the pipeline would actually carry diluted bitumen. The other pipeline would carry natural gas based condensate back to the oil sands. On June 17, 2014,  the federal government approved the Northern Gateway project subject to the 209 conditions imposed by the Joint Review Panel six months earlier.

First Nations and enviromental groups then filed court challenges to the project.

The report notes that on December 17, 2014, the Federal Court of Canada consolidated all the challenges to Northern Gateway in a single proceeding.

Those challenging the Northern Gateway have until May 22, 2015 to file with the Federal Court the Appellants’ Memoranda of Fact and Law.

Northern Gateway must respond with a Respondents’ Memoranda by June 5, 2015.

The company says the Federal Court hearing will open sometime in the fall of 2015, with a decision possibly late in 2015. Enbridge expects either one side or the other to seek Leave to Appeal to the Supreme Court of Canada which could delay the project into 2016 or 2017.

The report says that in October, 2014, Enbridge began reviewing its cost estimate for Northern Gateway, “based on full engineering analysis of the pipeline route and terminal location.” Now the companys says “the final cost of the project will be substantially higher than the preliminary cost figures included in the Northern Gateway filing with the JRP, which reflected a preliminary estimate prepared in 2004 and escalated to 2010.”

What is raising the cost of Northern Gateway include “significant costs associated with escalation of labour and construction costs” probably due to LNG other projects, as well as satisfying the JRP’s 209 conditions. It appears also that Enbridge is finally actually looking at the costs of building the pipeline over BC’s rugged terrain, “a larger portion of high cost pipeline terrain, more extensive terminal site rock excavations and a delayed anticipated in-service date.”

Enbridge adds: “The updated cost estimate is currently being assessed and refined by Northern Gateway and the potential shippers.”

It may be that Northern Gatway’s future is becoming more precarious, especially with the collapse in world oil prices.

Enbridge notes: “Subject to continued commercial support, receipt of regulatory and other approvals and adequately addressing landowner and local community concerns (including those of Aboriginal communities), the Company now estimates that Northern Gateway could be in service in 2019 at the earliest. The timing and outcome of judicial reviews could also impact the start of construction or other project activities, which may lead to a delay in the start of operations beyond the current forecast.” (The 2020 or 2021 figure came from the conference call and slide presentation, not the strategic report)

Given the many uncertainties surrounding Northern Gateway, including final ownership structure, the potential financial impact of the project cannot be determined at this time.

The Joint Review Panel certificate granting Enbridge permission to proceed expires, under Condition 2, on December 31, 2016. Under Condition 187, Northern Gateway must assure the JRP and National Energy Board that it has sufficient financial resources to both build the project and to implement all the safety and environmental conditions imposed by the JRP and accepted by Stephen Harper’s cabinet when it approved the project.