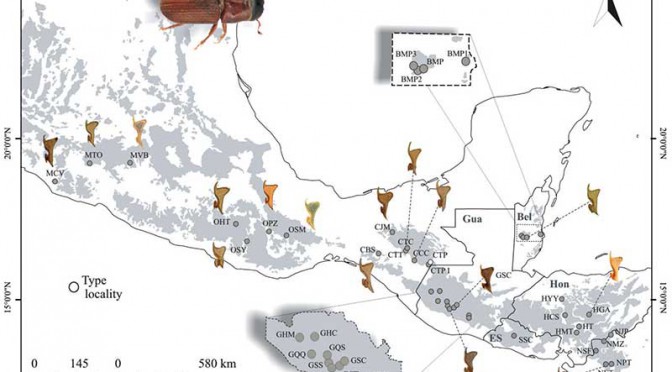 An international team of scientists have identified a new species now called “the mesoamerican pine beetle” that is causing “catastrophic” damage to forests across Central America.

The new species, Dendroctonus mesoamericanus, works in concert with its cousin, the southern pine beetle,  Dendroctonus Frontalis. Both are responsible for damage to pines, according to the United States Department of Agriculture.

Bark beetles of the genus Dendroctonus rank high among the most destructive conifer pests. The mountain pine beetle has destroyed forests across British Columbia and is now moving into Alberta.

The USDA says  attacks  “attributed to the southern pine beetle has led to declines in pine forests and multimillion dollar losses in timber, recreation, and other ecosystem services,” in Mexico, Belize and other countries in Central America.

As far back as 2002, scientists suspected, but could not confirm, that the problems in Central America were caused by two different pine beetles. From early 2000 to 2002, 25,000 hectares of mature pine stands in the Mountain Pine Ridge Forest Reserve of Belize were devastated by an outbreak of what was initially identified as the southern pine beetle. At the time the scientists investigating the outbreak suspected the trees were also infested by a second insect that they then called the “caribbean pine beetle.” However, there was insufficient evidence at the time to warrant scientific publication.

Between 2006 and 2010, Brian Sullivan, an entomologist with the USDA, and his colleagues,  conducted studies on the pheromone and body wax chemistry of the beetle. Those studies provided clear biological evidence that it was a species new to science. Extension and forest health education programs in the Central American region have already begun to include information on the mesoamerican pine beetle.

Southern and mesoamerican pine beetles do differ in several respects. The mesoamerican adults tend to be somewhat larger than the southern pine beetle, and the holes where they enter the tree’s bark exude more resin, producing bigger “pitch tubes.”

Researchers have found mesoamerican pine beetles attacking eight species of native Central American pines and have collected the insect from Belize, southern Mexico, in Oaxaca, and Chiapas states, in Guatemala, El Salvador, Honduras, and Nicaragua. In these countries, the species has been collected at elevations from 311 to 2600 metres.

“A thorough understanding of this species complex – the southern and mesoamerican pine beetle acting in concert — may prove critical for developing integrated pest management strategies for the Central American region,” said Sullivan. “This discovery also brings to light a potential exotic threat to the U.S. that was not previously known to exist.”

Access the full text of the journal article: http://www.srs.fs.usda.gov/pubs/47987