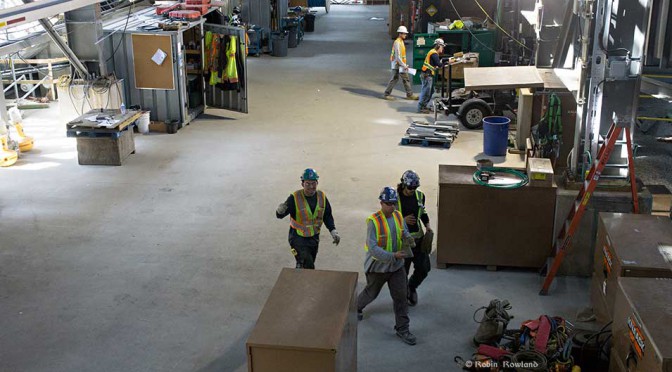 Gaby Poirier, BC operations manager for the Rio Tinto Aluminum metals group called it a shining moment as the first ingots from the new modernized potlines were wheeled into the also new Henning Hall at the Kitimat smelter on Tuesday, July 7. Referring to the nearly complete Kitimat Modernization Project (KMP), Poirier said, “It’s now like these ingots, our time to shine. Let’s all shine together and become the best aluminum smelter in the world.”

The Kitimat Modernization Project increases aluminum production capacity by 48 per cent. “I have no doubt that KMP will help secure the future for Rio Tinto in British Columbia as a supplier of high quality, low carbon footprint aluminium for the Pacific Rim customer,” Poirier told employee and guests at the First Metal ceremony. (The company held similar ceremonies later in the week for employees unable to attend the first event).

“As we move to ramp to full production sometime in 2016, the transition is still at an early stage. Now more than ever we have to keep the focus to have a safe, sustainable ramp up. When we reach our full capacity of 420,000 tonnes sooner than you think… we’ will have been here 60 years. We’re aiming for another 60 years now.

“It’s more than a ramp up for us; it’s our journey to be the best aluminium smelter in the world. And yes the best, nothing less. Everything starts with a dream. So today we’ve got about 10 pots started, there are still 374 to go. And all this ramp up will be done to a scheduled drum beat, with a safe and sustainable. So today’s a well-deserved celebration for first hot metal and we are now preparing our first metal shipment but there are still significant challenges among us that we’ll go through together. One team one goal. That’s the only way we’ll be successful by working together.”

The modernized smelter, which was delivered in line with the revised schedule and budget, is powered exclusively by Rio Tinto’s wholly owned hydro power facility [at Kemano] and uses the company’s proprietary AP40 smelting technology which will effectively halve the smelter’s overall emissions, Rio Tinto said in a news release.

Michel Charron, KMP Project Director with Rio Tinto’s Technology Group, told reporters that the project did come in at the revised budget of $4.8 billion up from the original estimate of $3.3 billion, discounting reports in some media that the costs had reached as high as $5.5 billion. ‘”They gave me 4.8 and I finished at 4.8,” Charron said.

Charron compared what’s left to do with someone moving into a new house. “There’s a bit of asphalt to be put in, there’s a bit of construction on the last part of the potline…. there’s three months to finish up everything, the little things, the painting, so we’re going to be doing that.”

As of July 7, KMP employed 1024 people, Charron said. As the construction finishes, he said, “The work force will be going down quite rapidly at the end of July and through August and September,”

“As we focus on getting a brand new and somewhat very complex facility up to speed, I urge you to remember that safety remains our top priority, ” Poirier said. “If we get this right the start-up and ramp up will be right too. And this is the only way we can be successful in delivering that world class project. So now in a few words, it is now the time to show what four generations of aluminum producers can do,” Poirier said.

The pole tells the story of a time when there were a lot eagles in the Kitimat region. One young man was told “to listen to your elders, listen to your mother, not to laugh at handicapped people, not to laugh at old people for they are good in their own way,” Robinson said. Another thing that this young man was told was never to pick up anything shiny, but he didn’t listen and tried to capture a fur seal that has shiny fur. Unfortunately, for the young man, at that moment a giant eel was swallowing the fur seal and dragging them both down to the bottom of the sea. The eagles, however, got together and lifted the seal and the young man from sea and he safely returned to the beach.

Taylor Cross, Deputy Chief Counsellor for the Haisla, said “It’s a great feeling that big companies like this are doing their best to protect the environment we all live in. Every last one of us enjoys this beautiful country we live in. Myself I’m on my boat almost every weekend, down the Channel. I want to that to continue that for the rest of my life and for my kids’ lives. I want to pass that knowledge on that I’m getting. This project created employment opportunities for us, contracting opportunities for the Haisla Nation and training that we would have never gotten.

“Our unemployment rate when from about 60 to 65 per cent down to may be five or eight per cent. Every Haisla Nation member who wanted to work was working. It was a great achievement, it gave them skills, training, anything they wanted to be. And getting ready for the next project that’s going to come through Kitimat.” Cross warned that with KMP ending, unemployment among the Haisla will be going up again. The legacy agreement signed between Rio Tinto and the Haisla will ensure that members of the First Nation will continue to be trained and be part of running the smelter. A Haisla joint venture runs catering for the cafeteria.

“Of course we have a wonderful platform. The platform not only being Kemano…the Douglas Channel and of course the site that… we have here in BC. The modernized smelter we know well. It is world class we have adopted the best technology we can apply in this location coupled to the lowest cost energy supply to a smelter anywhere in the world with access to global markets particularly the Asian Pacific Rim

“Sounds like a factor of success to me. If you’re going to build it, you build it right here.

“Even though the economic climate was difficult during the journey we’ve been through, I always felt that I had support at every level. We continued to get funding, even if it at sometimes it was smaller than we wanted. We got funding to keep this project alive. We engaged at different levels the creativity in construction… to help us get over that threshold and that hurdle to allow us to be here today. to be able to celebrate this fantastic milestone.

“I truly believe that KMP is a catalyst for megaprojects in the northwest. I am fortunate to be involved in other projects that are looking to come to Kitimat and they’re going to come to Kitimat because of its location but what I think you’ve also demonstrated as a community that they’re coming to Kitimat because of its people, As a host community you’ve demonstrated that you can live alongside and support three and half thousand construction professionals at any given time,

“I hope that legacy of the learning is two things, It’s enabled the community to be ready and be better prepared for the next one, also for those companies to learn from some of the opportunities and challenges we’ve been through and overcome.

“It was built in Kitimat BC by Canadians… I think at one point I think we had a hundred international workers. So the [labour agreement] allowed the ebb and flow of workers here form a Canadian base. I think that is also a true success factor.”

“For myself each milestone that we go through is a pinch. My goodness we actually pulled this off. We actually pulled this off. So my challenge, you know have the tools. you know have the equipment. You have the people, I was never worried about the people, smelting is in our DNA, three perhaps four generations of smelter experts in Kitimat. Now is your time to show what the best smelter in the world can do.” 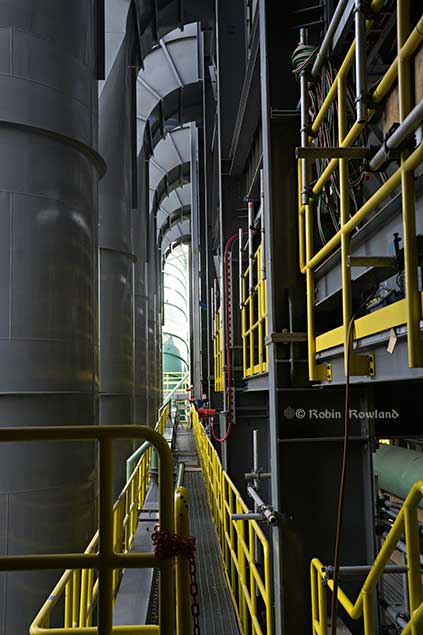