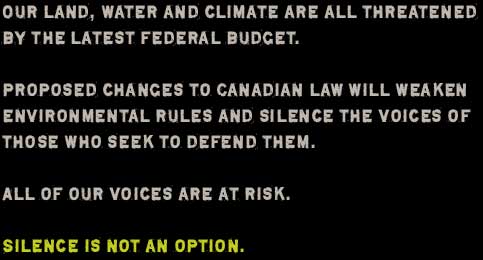 On Monday, June 4, 2012, many web sites across Canada (and some in the United States)  will “black out” to protest the draconian provisions of Bill C-38, the huge omnibus bill that threatens to remake this country without proper debate either in Parliament or with the public and the news media.

As a news site, Northwest Coast Energy News will not “black out” as we have an obligation to continue to cover the news. However, make no mistake, this site supports the BlackOut SpeakOut campaign for free speech in Canada. Without free speech, the Canadian people cannot come to any informed decision on the vital issues of economic development and environment protection and climate change. Without free speech, the future of this country will be decided by the whims of the prime minister and a few of his cronies in the federal cabinet.

The word “Parliament” means to speak.  Now Stephen Harper and the operatives in the Prime Minister’s Office have gone so far as to forbid members of the Conservative Party itself to represent their constituents and actually express that representation in public, in the media and even in Parliament.

Not only is the Conservative government of Stephen Harper putting unprecedented amounts of  legislation which should be in separate bills in to the budget act and limiting debate on the bill, the government is doing everything it can to stifle debate on the issues within the massive bill.

Even before it got its majority last spring, Stephen Harper and his government stifled scientists and other officials in the government’s employ from discussing even the most minor of issues.  The government now acts like a Third World dictatorship by sending “minders” along with the scientists when they go to international conferences. You have to wonder what the world thinks when Canada sends minders to watch over this country’s scientists, just as Iraq under Saddam or Syria today use minders to watch over visiting journalists.

Stephen Harper and the Conservatives are cutting funding for world-class  scientific monitoring across Canada on marine pollution, studies on the changes in the ozone layer and the state of fresh water lakes. Bill C-38 will gut fisheries protection, based on the strange belief that you can protect large rivers without protecting smaller spawning streams. If the government believes that these cuts will save the taxpayer money, will reduce the deficit, they live in a fantasy world.  These cuts mean that future generations will be paying and paying to clean up the cross-country enviromental disaster that will be the legacy Conservative policies. One also has to wonder if the resource companies, which throughout history, (or at least up until now), have used that scientific research are now blinded by political ideology.

Here on the west coast, the cuts to Coast Guard protection will have a devastating effect on the safety and lives of mariners who work the BC coast and all the spin about future coast guard vessels that may be launched years from now does not change that.

We have seen the government attack environmental groups that may receive part of their funding from foreign foundations (and why not, we all live on the same planet?) while apparently accepting foreign funding to so-called “think tanks,” like the Fraser Institute, which support the Conservative Party. The Conservatives also see nothing wrong with billions in foreign investment in the energy sector, much of it from China, and the money those companies put into lobbying.  Apparently if you “invest” you have free speech, if you are not an “investor,” your free speech rights are not as important.

If the energy and other resource development companies think that Conservative policy will fast-track their plans and project, then think again. Talk of civil disobedience across British Columbia is increasing day by day. The cuts to marine pollution monitoring and Coast Guard protection mean that more people who were neutral or even supportive of those projects are now moving toward the opposition.

The freedom to speak in the media and in the public sphere remain in Canada (for now).  Parliament, however, under the contemptuous gaze of Stephen Harper, is fast becoming nothing more than a puppet show, with Harper pulling the strings.

The Blackout Speakout campaign  shows how much democracy in Canada has decayed since Harper won his majority last May.  Who would have believed a year ago that this country would need to have a campaign for free speech?

In the years before Confederation in 1867, Canadian politicians campaigned for what was called “responsible government.”  It is now time to fight that battle all over again.