A report issued by Ernst & Young, The Global LNG Report, says that there will be strong demand for liquified natural gas over the next 10 to 20 years. At the same time LNG buyers will increasingly push back from “price-sensitive buyers who are likely to be less willing to pay supply security premiums.

That means that the pricing for LNG in Asia will move away from the link to the price of oil, which, so far, has been driving the potential profit picture of Kitimat’s LNG projects.

Even with reasonably strong demand growth, this implies growing supply-side competition and upward pressures on development costs and downward pressures on natural gas prices. Nevertheless, the very positive longer-term outlook for natural gas is driving investment decisions, both in terms of buyers’ willingness to sign long-term contracts and sellers’ willingness to commit capital to develop the needed projects.

The report says there have been three waves of LNG development.

The first wave was dominated by Algeria, Malaysia and Indonesia, while the second wave has been dominated by Qatar and Australia. The third wave could come from as many as 25 other countries, many of which currently have little or no capacity; but by 2020, these countries could provide as much as 30 per cent of the world’s LNG capacity.

The accounting and consulting firm says the most important LNG exporters will be those in western Canada and the United States “where the source gas is likely to be priced on a spot basis, unlike gas elsewhere in the world which is generally priced (wholly or partially) on an oil-linked basis.”

The report, and the charts that accompany it, show that Kitimat appears to be well positioned in 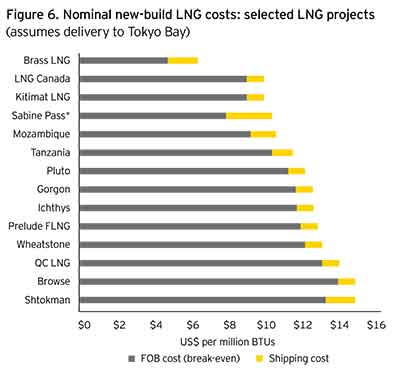 the new LNG market. That’s because the capital cost of developing LNG projects in Kitimat, when
compared to potential return, is a lot lower than in many competing countries.

The one problem Kitimat may face in the future is competition from U.S. “brownfield” developments that could turn import terminals into export terminals.
Ernst and Young says that country most cited as Kitimat’s competition Australia, is facing problems.

LNG project proposals are growing faster than industry’s capabilities to develop them. Generally at the high-end of the cost curve, with development bottlenecks and spiraling construction costs, Australian projects are typically under the most pressure. Sanctioned projects are generally less significantly impacted, but projects still seeking contracted off-take are at substantial risk.

One advantage for Kitimat may be that buyers, worried about the volatility of the market, may be more inclined to sign long term contracts. 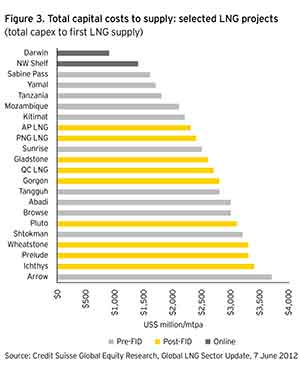 The proposed North American LNG export projects are particularly well-positioned, even though the US Gulf Coast projects will give up some of their Free On Board (FOB) cost advantage with higher shipping costs. As substantial volumes of lower-cost LNG move into Asian markets, projects at the high end of the supply curve – namely, many of the Australian projects – will become increasingly vulnerable.

Going forward over the medium-to-longer-term, Ernst & Young expects to see a gradual but partial migration away from oil-linked pricing to more spot or hub-based pricing. LNG sellers are reluctantly facing realities and are offering concessions in order to remain competitive.

Dale Nijoka, Ernst & Young’s Global Oil & Gas Leader concludes: “LNG prices are unlikely to collapse, simply because the cost to supply is high and incentives to develop new capacity must be maintained.”