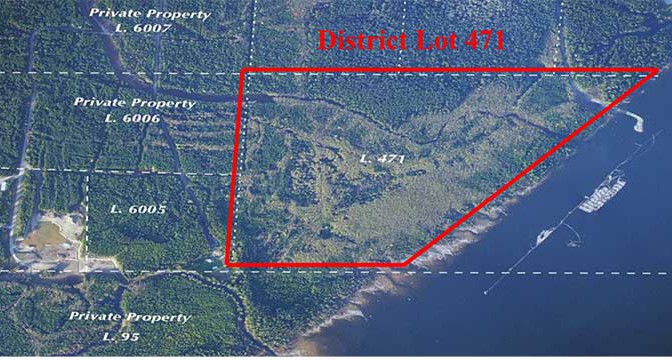 Rio Tinto Alcan has donated 156 acres (63 hectares) of waterfront land on Minette Bay to the District of Kitimat, Gaby Poirier, RTA  General manager BC Operations, said Wednesday, November 12, 2014. It’s a major step in getting people in Kitimat access to the waterfront which is being closed off by industrial development.

In a news release, Poirier said.

It is with great pleasure that Rio Tinto Alcan confirms today a gift to the people of Kitimat of  approximately 56 acres of water front land that make up District Lot 471, located in Minette Bay.

For more than half a century Rio Tinto Alcan has participated with pride in the development of  Kitimat and Northwest British Columbia. In the 1950’s Rio Tinto Alcan developed a company  town from mostly undeveloped land. Today it is a mature, vibrant, and highly liveable northern  community. We are very proud of our involvement in making this happen.

Now, 60 years later, a new era of industrial development is on our doorsteps. Rio Tinto Alcan’s  BC Operations is looking forward to having new neighbours beside us near the smelter site and  port terminals. It is important now, more than ever, to ensure the people of Kitimat continue to  have direct ocean access.

To that end, Rio Tinto Alcan is pleased and committed, in this our 60th Anniversary year, to  transfer ownership of the water front lot DL 471 to the District of Kitimat in trust for its citizens use for all time.

Ron Poole, District of Kitimat Chief Administrative Officer, tells Northwest Coast Energy News, “As part of the gifting of Lot 471, RTA has agreed to guaranteeing road access across their property to access this lot.”

“It has roughly one kilometre of waterfront on Minette Bay,” Poole says. “We do not have preliminary plans for the site, however, council for years has been negotiating with RTA to provide water access and this is one lot they owned that meets the public need.”

If the Shell-led LNG Canada project goes ahead, with LNG Canada taking over the old Eurocan dock (it already owns the old Methanex dock), that means Rio Tinto Alcan would have to expand its port facilities at “Terminal A” (the original port) and that would cut off access to Hospital Beach which has been the only beachfront available to residents since the 1950s.