The Kitimat Rod and Gun Club Tuesday asked the National Energy Board to place special conditions on the Kitimat LNG project so as, in the words of Rod and Gun representative Mike Langegger, to preserve “the fish and wildlife values of the northwest,” from the “cumulative effects” of industry encroaching on the wilderness.

The board panel,which is considering the project’s application for a natural gas export licence,  allowed Langegger to testify early in the proceedings, now expected to run at least until Thursday, because he has other commitments.
In response to a specific question from Lynn Mercier, presiding member of the board panel, Langegger asked that the NEB require the KM LNG partners, energy giants Apache, Encana and EOG,  establish a joint committee with Kitimat residents, both First Nations and non-First Nations, to preserve the values of the wilderness around the liguified natural gas terminal.
He also asked that the energy companies create special funding “dedicated to fish, wildlife, and the environment…to maintain the fishing, hunting [and] recreational activities used by residents not just for now but for generations to come.”
The liquified natural gas terminal is proposed for Bish Cove, down Douglas Channel from Kitimat, an area that is currently still largely wilderness.
Langegger noted that crucial salmon breeding rivers flow into Bish Cove from the surrounding mountains. Bish Cove is also known as a habitat for deer and bears, both black bears and grizzlies.
He also asked that Kitimat residents continue to have access, as they do now, to the bush surrounding the proposed terminal “with no gates, no lockoffs.” Langegger complained to the board that Rio Tinto Alcan has, in recent years, restricted access to the Kitimat River estuary, near the aluminum plant, while once Kitimat residents had easy entry to the estuary. 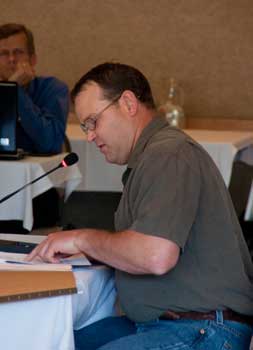 Langegger said that Rod and Gun members and other Kitimat residents fear the cumulative effects of the destruction of the wilderness, and specifically that some of the past practices of the forest industry, which he said had a “huge detrimental effect,” could be compounded by the Kitimat LNG plant and other projects.
While not referring directly to the proposal, Langegger was bringing in the Enbridge Northern Gateway project, which is being considered in a separate National Energy Board proceeding.
Lanegger told the NEB panel that he hoped that “the new generation of industries coming [would] accept those values” of fishing, hunting and recreation.
Mike Langegger of the Kitimat Rod and Gun
club checks his notes while testifying before the NEB. (Robin Rowland/Northwest Coast Energy News)