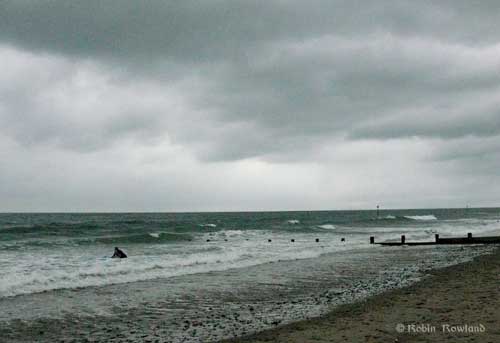 A surfer enters the water on a stormy beach at Tywyn, Wales, July, 2008.  Scientists from nearby Aberystwyth University  have studied kelp as a potential biofuel. The kelp was growing near a rocky outcrop some kilometres south of  Tywyn at Aberystwyth Beach near Ceredigion.  (Robin Rowland/Northwest Coast Energy News)

Kelp has potential as a renewable biofuel resource because it is a fast-growing, large “macro-algae” that could be harvested, processed and turned into ethanol, methane or bio-oil, according to a recent study in Wales.

The study by Jessica Adams  and colleagues at Aberystwyth University in the west of Wales was presented at a biology conference in Glasgow on July 4, 2011 and published in the journal Bioresource Technology.

Coastal Wales has a similar environment to the west coast of North America and  both regions are abundant in kelp.

In her paper, Adams says that most biofuels today come from terrestrial sources such as agricultural products or forests, and both sources can cause environmental problems.  Harvesting kelp  for biofuel would mean that potential food crops,  such as maize, would not be taken out of the food supply chain. She says the ocean  accounts for half of the primary biomass on the planet, but has not been used very much in the search for biofuel.

Her study, assisted by the Energy and Resources Institute at the University of Leeds, concentrated on the potential that kelp has for producing fuel at various times of its life cycle during the year.

By analyzing the chemical composition of kelp harvested  at low tide at rocky outcrop on Abesrtystwyth Beach, Ceredigion, Wales, Adams and her colleagues determined the best time to harvest the kelp for use as potential biofuel, which in the case of Wales, was in July when the kelp had the highest levels of carbohydrates, including two key sugars, mannitol and laminarn, which are easily converted to biofuel. Those carbohydrates could be fermented or put through anaerobic digestion to produce either ethanol or methane. Another method is pyrolysis,  a method of heating the fuel in the absence of oxygen, which can produce bio-oil.

Another advantage that kelp has over terrestrial plants is that it contains little cellulose and thus is easier to handle when creating biofuel.

The First Nations of British Columbia used the kelp for centuries, as a place to find  fish, crustaceans and shell fish in the kelp beds or to hunt seals that fed on the fish. In some parts of the BC coast, First Nations used kelp branches to harvest herring roe  (before the collapse of the herring stocks)

For the past century, modern use has concentrated on the minerals the kelp produces,  it was burned to obtain soda ash (sodium carbonate) , used for the production of soap, ice cream and lotions as well as in some processes for making glass.

Kelp is increasingly popular as a health food, both as an edible seaweed and for health supplements.   In British Columbia, kelp is harvested  for health food at a time of peak mineral content, when the content is  25 per cent to 50 per cent minerals,  including potassium, calcium, magnesium, phosphorus and iodine. Salt extracted from BC kelp is high in potassium and thus attractive for people on low sodium diets.

For biofuel, however,  the time when kelp is highest in minerals, and thus attractive to the current harvesters, is not the time it would be best for biofuel.  Adams says: “Seaweed ash has previously been reported to contain, potassium, sodium and calcium-carbonate  and high concentrations will lead to increased slagging, fouling and other ash related  problems during thermochemical conversion.”

In Wales, Adams’ study showed that the mineral concentration in the kelp peaked in March and was lowest in July, a time when the carbohydrate content is also higher.  She says   “This means that a July harvest would provide the highest heating value and the lowest ash  and alkali index values, making it the best month for harvesting  for thermochemical conversion.”

It appears also that cleaner water will produce kelp that is better suited to biofuel conversion, since the kelp her study used from Cardigan Bay had a lower mineral content than kelp from areas off Cornwall where effluent from the tin mines was carried by rivers into the ocean in that region.

An earlier small pilot project in 2008 at a royal estate on the north coast of Scotland looked into the possibility of setting up a kelp farm that could potentially used for biofuels.  That project showed that using kelp for biofuel meant that agricultural land did not have to be taken out of production for biofuel planting and even that agricultural runoff could be used to fertilize a concentrated kelp farm.

The species of kelp used in the Welsh study had high concentrations of both water and minerals and  that is whyJuly was the optimal time for a possible biofuel  harvest.  Other species, in other areas,  once studied, might be better suited to be used as biofuels. Adams concludes by saying: “Macroalgae or macroalgal residues could pryrolysted to create a bio-oil or used in hydrothermal liquefaction to make bio-crude  in a process which does not require the initial drying of the feedstock.” 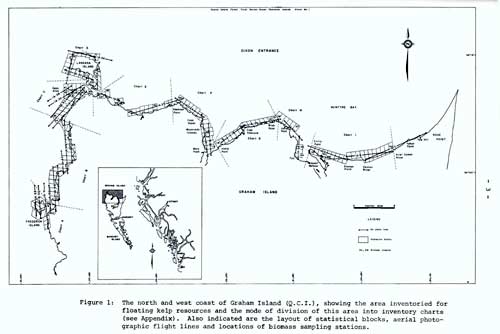 Map of the kelp beds on the north coast of Haida Gwaii, taken from the BC provincial government kelp inventory survey.