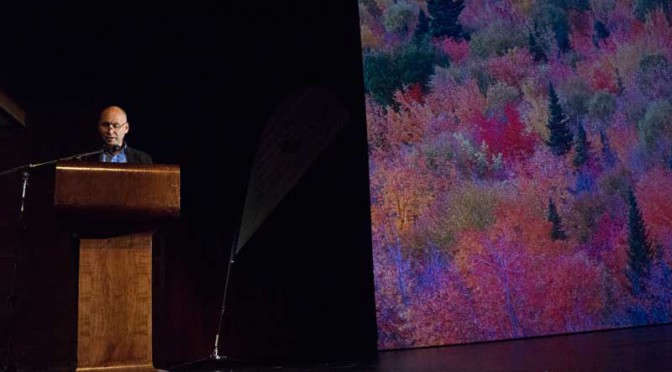 Haisla Nation Chief Counsellor spoke at Mt. Elizabeth Theatre on June 9, 2015, introducing David Suzuki who was on a speaking tour. This is a lightly edited report on his remarks that outline some of the dilemmas facing the Haisla and the Kitimat valley in an age that needs development but faces climate change.

Among chiefs, I am elected, not hereditary, you are born into that position, I wasn’t born into it.

I am basically a regular commoner just like you guys with a high school education and one year of college and a lot of experience outside my community that I bring back.

There’s no one true fix for all of it. The problem is that the Haisla have been thrust into the middle of it and we have to answer it, which is very unfair.

So when we’re talking about what really is a Haisla value, a west coast, a British Columbia value. I must tell you I value the Haisla people, my people, that land, the territory, I think about the Haisla people because I don’t think anyone has given the Haisla people a priority in the last 40 to 50 years.

All the decisions that were made about Haisla territory, that affected out people, were made without us.

The result was that we ended up with 80 per cent unemployment, historically over the last 40 years we have ended up with cancer and we can’t get rid of it.

Poverty, people couldn’t get enough money to fix their bathrooms when the floor was rotting out.

The saying is that you can always tell when the reserve starts is when the pavement ends is true. Unless there’s a political agenda to actually pave the road to the village. The environmental questions that have been raised over the past ten years are not new to the Haisla.

When the Haisla knew that the oolichan that was estimated to be hundreds of thousands of tons, were dying off quickly in the span of five years. Nobody listened.
Now the DFO and Canada is realizing that the demise of the oolichan is a signal that something is wrong with the ecosystem.

I would love that someone would come around to the idea of thanking the Haisla people for all the work that they did and went and unheard even in meetings like this today.

And we’re not even talking about salmon.
In all this time, I’ve read all the documents, all the speeches and listened to all the promises of a better tomorrow for all the people but nobody delivered it.

Countless academic papers have been written about Indian poverty.

At the same time all the decisions continued to be made without us. And everybody benefited except us.

What happened in the end and the corporations made their billions and made enough money to pay off the mortgage and move down south, the Haisla were left with the mess to clean up. Today we’re still battling to get some of these sites cleaned up and we’re still not getting help.

I have a mandate. I do have an organization now that is fully equipped to look at every single permit that comes from the provincial government and the federal government and try to mitigate it given our capacity and our lack of funding.

But some of that benefit has to flow to the Haisla people. It’s our territory.

When you think about what has happened to us, the Haisla, we think about residential schools and I’ve been reading the debate on whether or not it’s genocide or not and I think people are missing the point.

Residential schools were only 10 per cent of a larger program to get rid of the Indian.

The ninety per cent was what was stolen from us as well. The land was taken away and we were put on a chunk of land across the Channel, that was described by the Indian Agent as worthless, it’s not even good for agriculture so give it to the Indians. We had to get permission from the federal government to leave that reserve. We had to get a piece of paper that said he’s allowed to leave the reserve and go pick berries.

We also have had no help other than some academic programs and some sort of study to deal with our suicides. I’m not just talking Haisla here. I really thought that one suicide every five years was really a bad thing. But finding out that my neighbors down the road from here to Prince George are dealing with ten suicides in the first quarter of this year.

It breaks my heart.

I stepped up and said I’ll take full responsibility for this but that means I have a hard message to deliver and I will deliver it on behalf of the Haisla people.

When it comes to climate change, we are living at a very unfortunate time, because finally we’re accepted at the provincial table, at the federal table, the corporate table.

We’re being included but unfortunately, we have to look at climate change as well. It’s a very tough position to be in when you’ve got a Grade 12 education from 1984 and one year of college education in 1985.

It’s a very tough topic, I can tell you. I’ve been to China, I’ve been to Korea and no matter what you say about the emissions there, Canada and BC have no problems with emissions here until you visit China.

I don’t have the answers.

I still believe that natural gas is a lot cleaner than coal and even if you put a small dent in it, it’s not enough to get these guys off nuclear power.

You say can you help get China off dirty fuel, but all their pollution keeps getting dumped on South Korea.

We’re being asked to do a near impossible task while I’m trying to dig my people out of poverty. At the same time, when we get this opportunity we’re giving our members very mixed messages, including our young people which is heart breaking for me.

Because we’re telling them get an education, don’t be a burden on society, get a job, but by the way there are no jobs here, there’s no way to get into existing industries so you better go to the oil fields of Alberta to get a job. A lot of our people head over there or to Vancouver.

I believe that our people are being sick and tired of being left out and left behind, while everyone else is moving on with their lives. I do want to what’s best for the region I do want to do what’s best for the province and Canada and the world. But I will not do it at the expense of the Haisla people. We’ve been at the dirty end of the tick for the last 40 years. It’s going to stop. Thank you very much and enjoy your evening.