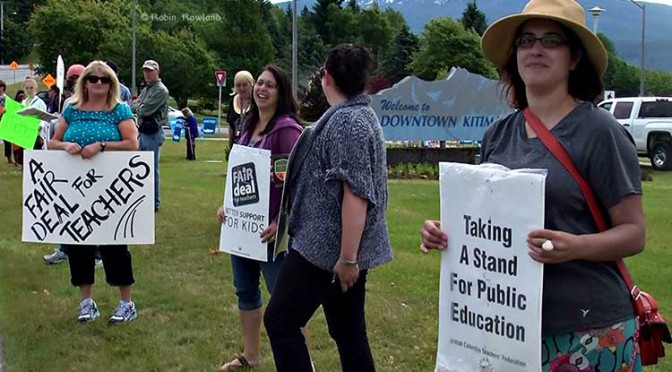 Kitimat Mayor Joanne Monaghan has slammed Douglas Channel Watch for a “disrespectful” demonstration held during the ceremony that saw the transfer of land from the province of BC to the Haisla Nation. BC Premier Christy Clark came to Kitimat for the event.

There were two groups of protesters across Haisla Boulevard from the transfer ceremony. While some were from Douglas Channel Watch, the vast majority were striking teachers.

In an e-mail from Monaghan to District staff and  to Margaret Ouwehand, who handles e-mail traffic for the environmental group, obtained by Northwest Coast Energy News, Monaghan wrote about the protest:

This was not respectful to the Haisla. This was one of the greatest moments in the government between the Hasila and DOK and all we could hear were blaring horns.  How disrepectful and a shame on our community. It would have been so much more cultured if that could have waited for an hour until the ceremony was concluded.

In the original notice of the protest  sent to Northwest Coast Energy News and Douglas Channel Watch subscribers on Monday, Ouwehand wrote:

At the beginning of her remarks at the ceremony, Monaghan also said, “First I would just like to apologize for some of the noise in the background and the disrepectfulness of what’s happening at this great, great celebration, we’re having with the Haisla people today.”

It was clear for reporters who went across Haisla Boulevard to cover the demonstration  that teachers, who began a full-scale strike on Tuesday, far outnumbered the handful of Douglas Channel Watch demonstraters in front of the “Downtown Kitimat” sign. It was mostly the teachers who lined Haisla Boulevard and waved signs, encouraging passing traffic to honk in support. Most teachers continued to protest while some members of Douglas Channel Watch left the protest to attend the ceremony that marked the return of the old hospital lands to the Haisla Nation.

As Northwest Coast Energy News reported Monday, as did the Douglas Channel Watch call for a demonstration, striking teachers had originally planned to rally at Centennial Park.

Reports on social media say the teachers changed their plans and moved the picket to Haisla Boulevard after the District turned on the sprinklers in the park.

The active sprinklers in the park  were clearly visible from the hospital site as the teachers lined the street and many passing vehicles honked.