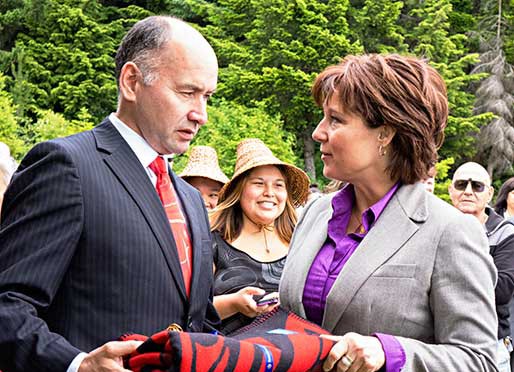 The Haisla Nation have purchased the old hospital site in downtown Kitimat from the BC government and are planning what will likely be a multi-million dollar development across from City Centre that will include a condominium-hotel, a new shopping mall and a restaurant.

Premier Christy Clark came to Kitimat Tuesday to announce the sales agreement along with Haisla Nation Chief Counsellor Ellis Ross. The agreement also involves the District of Kitimat indicating the beginning of building a new phase in the sometimes strained relationship between the district council and the First Nation.

On the day that the Conservative government approved the Northern Gateway pipeline project, all sides pointed to the hospital site agreement as an example of partnership that could lead to development of liquefied natural gas and other industrial projects in BC’s northwest.

The old pink hospital, built when there were plans for a Kitimat with 50,000 people was closed in 2002 when the new Kitimat General Hospital was opened. The old building was dismantled and then imploded in 2005 at a cost of $1.9 million.  Five years later, in 2010, the land was transferred from Northern Health to the province.

That began four years of negotiations with provincial ministries, the Haisla Nation and the District of Kitimat, so that the First Nation could purchase the land which is on their traditional territory.

The land has sat idle since 2005, although it is prime real estate as the economy of Kitimat begins to boom with the growth of industrial projects like the $3.3 billion Rio Tinto Alcan Kitimat Modernization project at the aluminum smelter as wells the Shell-led LNG Canada and the Chevron-led Kitimat LNG projects.

“It’s an important land transfer from the perspective of the community because this land has sat empty for too long,” Clark said. “It’s time for economic development. It will be such a big part of creating lots of energy, lots of jobs in the community but it’s really a demonstration of the partnerships that we’re going to have to have to make LNG and prosperity work in British Columbia”

Haisla Nation Chief Counsellor Ellis Ross told reporters, “This is an example of how things should be done” in regard to First Nations rights and title.  “Case law dictates how consultation must take place and if you respect and abide by them I think it proves we can actually come to a solution. BC’s not going anywhere, Canada’s not going anywhere, and First Nations aren’t going anywhere. None of us are going to get 100 percent of what we want. Where do we find that middle ground? It’s possible to do it if you actually take a page out of BC’s book and learn from the mistakes they made ten years ago to today where they’re doing things right.”

Both remarks were clearly intended to send a message to the federal government and Enbridge about consultations on the controversial Northern Gateway pipeline and tanker project.

Clark concentrated on showing the connection between the land deal and future liquefied natural gas development.

“There are over 13 LNG proposals for British Columbia, all of them are at various stages of developments and if anyone of those and we certainly hope it will be more than one reaches final investment decision, that is going to mean a lot of change,” Clark said.

“This site is really about nation building, it’s about community building and it’s about partnerships. This transfer of land will enable the Haisla to commercially develop this piece of property and that is going to mean huge opportunities in this community. It’s going to open up economic growth. It’s going to be a big benefit for Kitimat and the entire surrounding region on this piece of land that has sat empty for far far too long.

“We’re going to continue to work with the Haisla that have shown such vision and courage in leading the argument for LNG across this country and we want to make sure, as Ellis says that this property gets developed as soon as you possibly can. We’re very happy to work with the region of Kitimat, with industry with labour with First Nations to make sure we’re growing this opportunity for the future.

“We’re here because this was the day that worked for everybody. If there is a message for the country is that liquefied natural gas is a nation building opportunity. Ground zero is right here in Kitimat, this community is going to build our country the way that energy has built the country in the past. We have the resources in British Columbia to create hundreds of thousands of jobs and prosperity for every Canadian. I really want Canadian to know that this is not just a BC project. It’s not just a northwest BC project. It’s all these projects that are of national importance.

Ross did not put a cost on the project, since the first step is to do a survey for environmental remediation of the site.

An agreement in April between the Haisla and the District of Kitimat on how the lands will be developed was hailed at the ceremony as a step in healing the sometimes strained relationship between the District and the First Nation.

Ross praised the District of Kitimat for “their willingness to sit down and work with us,” adding that Tuesday’s agreement will lead to discussions on other issues.

Ross said Tuesday’s agreement is “a small step but significant” step in making the Haisla Nation members “self-determining from the ground up,” so they can get jobs without being dependent on either the Haisla Nation Council or other levels of government.

“We settled the five conditions, they’re very clear, they’ve been on the table for a very long time now,” Clark said. “It is up to the proponent in the private sector to figure how, if and when they’re going to be able to meet them. None of them have yet. So I want to assure people, that whatever decision the federal government announces today, our five conditions are not changing and none of the proposals have met those conditions, so we don’t support any of the projects as they stand.”

On the other hand, Clark said the proposed liquefied natural gas projects are “meeting all those five conditions. The companies that have invested in natural gas here in British Columbia are going to show the country that you can do business in British Columbia and we do it in a way that protects our environment and respects First Nations. We are proving we can do it, because we’re proving we can do it with LNG,”

Ross repeated that the Haisla are opposed to the Northern Gateway Project and that should the government’s decision approve the project, the next step is to go to court. He said that consultation by both the federal government and by Enbridge since the first contact in 2009 has been inadequate.