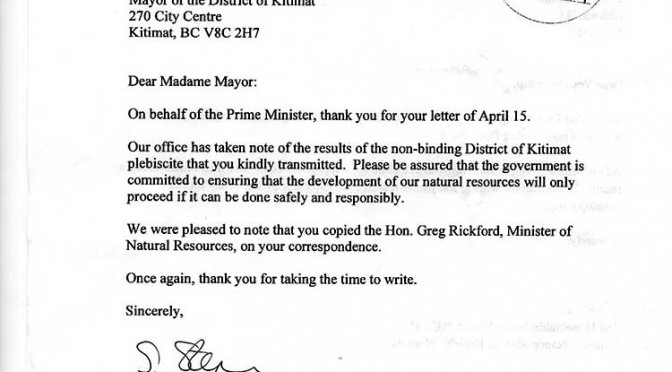 Both Prime Minister Stephen Harper and the Conservative political minister for British Columbia, James Moore,  have brushed off Kitimat’s concerns about the Northern Gateway Pipeline after a majority of residents voted to oppose the project.

After Kitimat residents voted on April 12,  1793  No or  58.42 per cent and  1278  Yes or 41.6 per cent against Northern Gateway, District Council voted on April 21 to oppose the project . Council also voted to send a letter to the Prime Minister informing him of the plebiscite results.

On June 13,  the Prime Minister’s Office responded to Kitimat with what was essentially a  form letter brushing off the district’s concerns and the plebiscite vote. That was four  days before the government officially approved Northern Gateway  along with the 209 conditions set by the Joint Review Panel. At the time, the government issued a news release about the approval, but no cabinet ministers or Conservative Members of Parliament commented on the decision for the media.

Even though Northern Gateway is a high priority for the Harper government, the Prime Minister did not bother to sign the letter himself. Instead it was Salpie Stepanian , an assistant to the prime minister who responded to the District for “taking the time to write.”

James Moore responded with a much shorter letter but apparently did sign the letter himself (if it wasn’t a sign-o-robot). He too thanked the District for writing and asked to be kept informed. Both letters were released at Monday’s District of Kitimat Council meeting.

Notes: On Monday District of Kitimat Council approved a $2500 support grant to the Kitimat EconomicDevelopment Association that says it is “active in pursuing development that will return Kitimat to a robust, self-sufficient community.” The grant was conditional in that it cannot be used for “initiatives Council does not support”–in other words Enbridge.