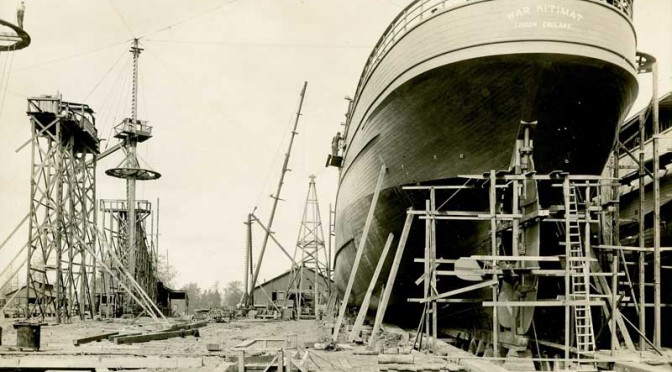 Ninety-seven years ago, long before the main townsite was founded in the 1950s, (the Haisla Nation, of course, had been here for thousands of years) Kitimat was to play a short, now forgotten and unlucky role in the First World War with the launch of a vessel in New Westminster called the  War Kitimat as one of the many emergency new ships commissioned by the British government to replace vessels lost to Germany’s unrestricted submarine warfare that was sinking convoys taking vital supplies across the Atlantic.

During the First World War, over nine million gross tons of British ships were lost due to enemy action, both submarines and surface raiders. The worst losses came in the three months ending June 1917 when over 1.4 million gross tons were sunk.

In December, 1916, the Prime Minister David  Lloyd George’s British Government appointed a “shipping controller” to manage a worldwide shipbuilding program to replace the lost vessels, to be built quickly, efficiently and to a series of standard designs. Although the vessels were often different, they were called “standard ships.” It was the Great War’s equivalent of the Liberty Ships built during the Second World War.

Many of the orders were placed with Canadian companies, others with the Japanese shipyards and British owned or controlled shipyards in Hong Kong and Shanghai. Canada created or contracted 19 emergency shipbuilders which built 137 cargo ships and 15 trawler/minesweepers. Some of these yards were purpose-built, others were repair yards that were converted to construction yards; seven were in BC, nine were in Ontario and Quebec, and three were in the Maritimes.

Orders were also placed with shipyards in the United States, but when the Americans entered the war in 1917, those ships were requisitioned by the U.S. Government.

All the ships’ names were given the prefix “War” no matter where they were built in the world.

The government of France also contracted Canadian shipyards for its own vessel building program.

In Canada, the BC Marine Railway Company was one of the prime contractors, and the job of building four ships was awarded to the New Westminster Shipbuilding & Engineering on Poplar Island, which can be seen today from New West’s Esplanade at Westminster Quay.

The First Nations of the area had used the island for generations and in 1871 the island was designated an Indian Reserve. During the small pox epidemic of 1889, with many members of the Vancouver area First Nations struck down by the disease, a hospital was built on the island. It is believed that many of those who died of smallpox were buried there. Because of the association with disease and death the island was abandoned until 1917, when the war time necessity meant a shipyard was built on the island.

The company built four ships, the War Comox, War Edensaw, War Kitimat and War Ewen. The War Comox was first launched in April, 1918, but completion was held up as the shipyard waited for equipment from suppliers. That led to pressure to build, launch and complete the War Edensaw, which was launched in June 1918, and the War Kitimat, which was launched on  Sunday, August 18, 1918.

The War Kitimat immediately ran into trouble. According to the Times Colonist, right after launch the War Kitimat ran aground off New Westminster and had to be lifted off the Fraser  river bed by using jacks until was raised enough so that tugs could attach lines and tow it to deep water.  About a week later, the War Kitimat was  towed to Victoria for repairs and further fitting out (possibly to the Foundation Company shipyard which was also building five of the war class vessels. Foundation is now Seaspan’s Point Hope Marine)

The War Kitimat did make at least one voyage to Great Britain, but by the time it arrived, the war was coming to a close. After the Armistice on November 11, 1918, the ships were no longer needed and the British government sold most of them to shipping companies. (All the ships were UK registry, not Canadian)

In 1919, the War Kitimat was sold to the Lloyd Royal Belge S.A. line of Antwerp, Belgium and renamed the Serbier.

On January 12, 1920, the Serbier, on a  voyage from Cartagena and Oran to Antwerp with zinc ore and general cargo on board, sprang a leak in her engine room during a “raging gale” in the Bay of Biscay and sank  80 nautical miles (150 km) off Penmarc’h, Finistère, France at 47°38′N 6°10′W. Her Capt. A. Canfrère and the crew were rescued by the French ship SS Docteur Pierre Benoit.

How the ship came to be named War Kitimat isn’t certain. It was probably named after the Kitimat River since other vessels in the War category were named Skeena, Stikine, Babine, Niagara, Ottawa (others were named for cities like Halifax or Toronto).

The Belgian shipping company did not give up on the name Serbier. It purchased another US-built War cargo ship, first named the War Hound by the British. After the US entered WWI in 1917 and took over the building there it became the Lake Huron, a US Navy Transportation Service mine carrier. From later in 1920, Royal Belge operated the new Serbier until 1924, when it passed through French, Norwegian, Danish and then as the Advance,  Finnish ownership. The Advance was seized in Panama by the United States in 1941 and renamed the Trojan. After the Second World War, the US returned the ship to Finland. It sailed as the Advance until it was sold a Greek shipping company in 1965 and scrapped at Piraeus in 1966.

Of the ships under British control, 821 ships were ordered by the UK shipping board and 416 were completed. Fourteen were lost to enemy action. The remaining orders were cancelled but often completed by the shipyards.

Many of the “war” or “standard” ships passed through various owners.

During the Second World War many played their original role and took part in the convoys that crossed the Atlantic.  Many were sunk during those crossings. Others, sold to growing Japanese shipping interests in the 1920s and 1930s, were sunk by US destroyers and submarines. Others like the War Hound /Serbier survived to the 1950s and 1960s.

Of the War Kitimat’s sister ships built in New Westminster, the War Comox was sold to an Italian company, renamed the Guidatta and scrapped at Genoa in 1925, The War Ewen was sold to a German company, renamed the Etienne Marcel and scrapped in Germany in 1925. The War Edensaw, under the original name, was carrying Admiralty stores from Constantinople to Malta,  when it caught fire on June 25, 1919 and sank 94 nautical miles east of the St. Elmo Lighthouse on Malta.

As for Poplar Island, it was zoned for industrial use but no one could come up with ideas for how to use the island.   New Westminster sold the island to Rayonier Canada in 1945, where it became an anchorage for log booms on the Fraser River. The successor company, Western Forest Products sold it back to New Westminster in 1995,  The island is still a wilderness area in the middle of urban Vancouver and subject to treaty and land claims negotiations with the area’s First Nations.

Related links
Poplar Island: A History as Thick and Colorful as the Trees

Emergency Shipbuilders of World War I

The Ship’s List (database of ships, link is to Lloyd Royal Belege entry)

Editor’s Note:   Up until now Kitimat has not had a reason, unlike other communities, to mark Canada’s role in the First World War.  We suggest that should the District of Kitimat choose to do so either this year or in the next three years, August 18, the date of the launch of the War Kitimat might be an appropriate date, in addition to Remembrance Day on November 11.