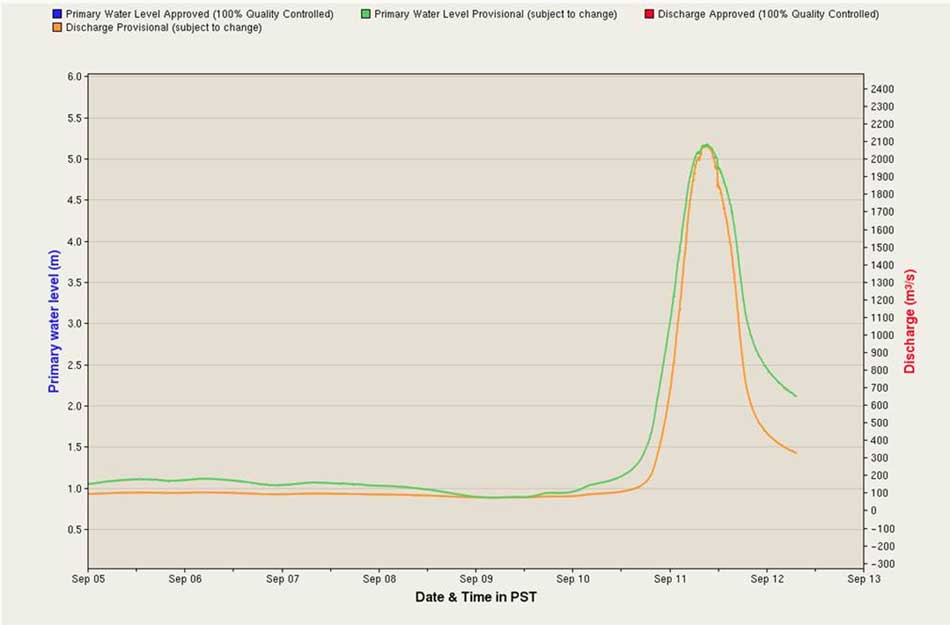 Both the RCMP and Kitimat Fire and Rescue are warning residents to stay away from the Kitimat River until the high water recedes. As well there are likely new hazards from a possible change in the river’s path due to the high water and as well as from debris in Douglas Channel.

Both detachment commander Staff Sergeant James McLaren and Fire Chief Trent Bossance made a special presentation to District of Kitimat Council Monday night to bring council up to date on the events that began early Monday morning.

The riverbanks are still hazardous, McLaren told Council and he urged that everyone stay away for at least the next two days. Anyone going out to fish in the Kitimat Arm of Douglas Channel, may also face hazards from snags, logs and debris such as floating propane cans. Bossance told Council in reply to a question from Councillor Larry Walker.

As well, Bossance told Council that the sudden deluge that began on Sunday afternoon is “not typical at all like the regular October flooding” that may be seen on the river.

Bossance warned that due to the volume and speed of the water it is likely that some parts of the river bed and river course have changed, and that the sandbars and snag areas that people may be familiar with may have shifted.

The effects of the flood are being monitored by RCMP, Fire and Rescue, Conservation officers, Fisheries and Oceans and provincial environmental officials.

Bossance said that the consensus of those officials is that the flood situation is unique in the history of Kitimat. Environment Canada issued a severe rainfall warning at noon on Sunday.

Bossance told Council  that people who were able to leave the riverbank said that they were able to walk out at about one a.m.  By 2:30 am, the river had risen so rapidly—about four metres—that by then people were trapped and calling 911 for help. McLaren said the RCMP immediately asked for the assistance of Kitimat Search and Rescue, who then requested assistance from Terrace Swift Water Rescue. Those units rescued twelve people from the riverbank.

A helicopter was called in and rescued two people.  The helicopter then made a sweep of the river bank but found no one else in danger.

McLaren told Council that as of 7 pm Monday no one had been reported missing or overdue.

The number of flooded vehicles or vehicles swept into the river is not certain, McLaren said,  but the number is estimated between twelve and fourteen ranging from large recreational vehicles to cars.   A preliminary assessment by ICBC indicates that the damage or loss of  vehicles will be covered but that will have to be confirmed by the vehicle owners.

Bossance said that high tide was not that much of a factor since it occurred at 5:30 am. Most of the high water was runoff from the upper Kitimat River.

Of the fourteen people rescued two were Kitimat residents, the rest from out of town.  Emergency social services has assisted those needed to find housing.

The RCMP will continue increased patrols in the river area until the danger has passed.