About a thousand people gathered in front of the British Columbia legislature on Sunday, April 12, 2012, for the Day of Action Against the Northern Gateway pipeline. But unlike protests, marches and gatherings here in the northwest of British Columbia, which are often tightly focused on the controversial pipeline and the associated tanker traffic and the potential dangers to northwestern BC, the protests in Victoria had a wider focus.  Speakers on the steps of the legislature spoke, not only of stopping the pipeline and protecting the coast against tanker spills, but also of protecting “Mother Earth” and the wider BC environment.

The speeches on the steps of the legislature began with a group of children from the Oak and Orca Bioregional School in Victoria, who spoke of their fears for the future of the planet.

Lisa MerCure, who spent years searching for First Nations roots, only to discover her Cree family lives in Fort Chipewyan in Northeastern Alberta  and are suffering from cancer. She spoke of the dangers from the bitumen sands development, from the tailing ponds and the effluent in the Athabaska River.

Other First Nations speakers spoke of the dangers to the rivers and coast of northern BC.

The recent announcement that Kinder Morgan would greatly increase the capacity of its pipeline from Alberta to the Vancouver area added new impetus to the protest.

After the rally at the legislature, the protesters marched along Douglas Street to Centennial Park for an afternoon of workshops.

Slideshow  “Our Coast Our Decision” Signs of Protest 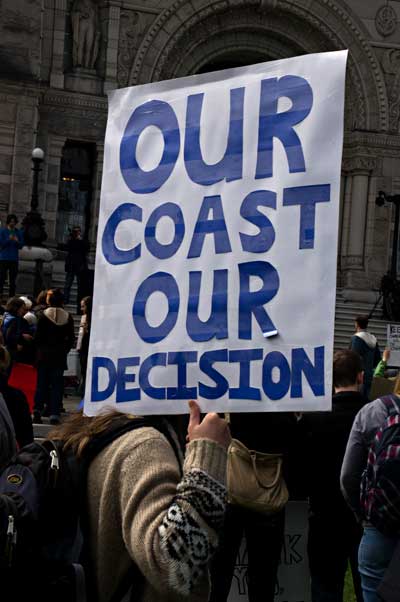