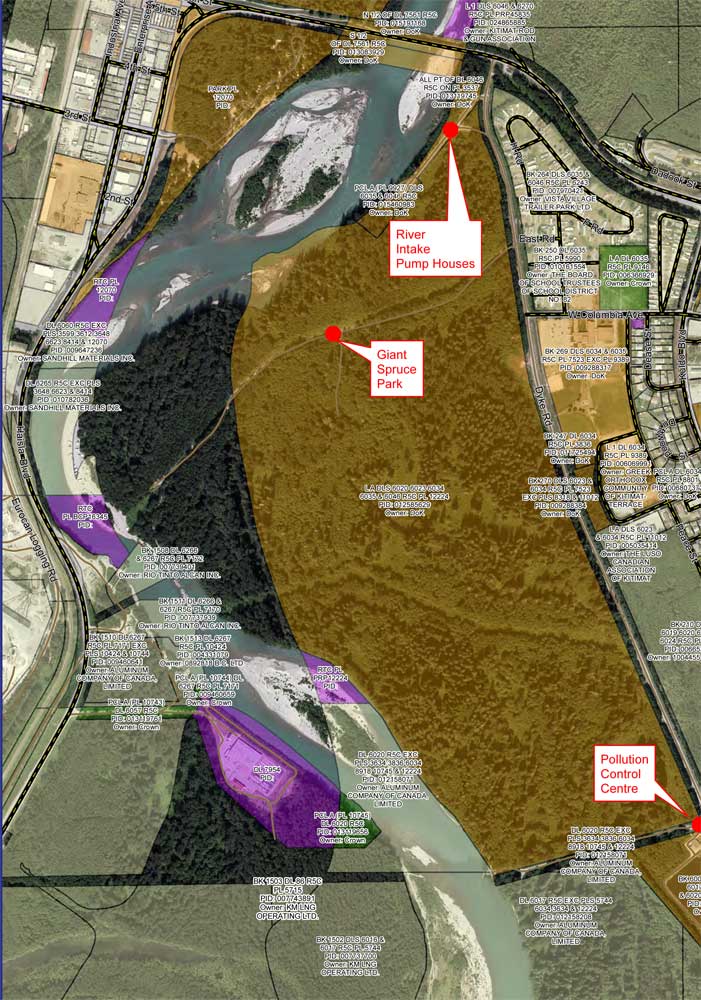 That vote came after council split five to two  again to defeat a motion by Councillor Mary Murphy to stop riverside camping altogether.

A proposal from District staff to put access gates at three locations, the Giant Spruce Road, the Sewage Plant and the Pump House was tabled for the time being. However, the councilors and staff marked the pump house gate as a priority for study by the engineering staff due to concerns that “the risk of fuel, oil and other contaminants (i.e. Illegal dumping ) occurring. This is the source water area for the city’s water supply, reducing access reduces contamination risks.” Staff said that unlike other portions of the riverbank, the District does “have authority under drinking water protection act to protect this area.”

Council also voted to close Hirsh Creek park immediately because the roads at the camping area were washed out by the flood last week.

Councillors noted that many people still go to Hirsch Creek after the gates are closed at the end of the season to walk dogs or hike. This results in a parking jam at the front of the gate and on busy times, cars park on Highway 37 which could endanger pedestrians.

District staff will study moving the park gate down further to a point that the road narrows near the first campsite to allow safe access for dog walkers and hikers.

The main problem facing the District of Kitimat is that most popular sites along the riverbank for campers are on provincially owned Crown land. In 2014, the former BC Liberal government passed a regulation that says people can camp on Crown land for up to 14 days. As some councillors pointed out this restriction regularly abused by some campers who stay on the riverbank for weeks, some apparently camping from Victoria Day to Labour Day.

During the debate it was pointed out that often those camp on the riverbank like to “claim” a camping/fishing spot and try to prevent others from using it. “I know of a couple of fistfights,” Murphy told Council.

As Councillor Rob Goffinet pointed out, whether or not the District could place gates on municipal land to stop access to provincial Crown land would require a legal opinion.

Murphy told Council that she had received emails, blaming Kitimat for “almost drowning” some of the campers. She said that her views may be unpopular among some residents, but added, “I don’t care if I’m unpopular, I want to keep people safe.” 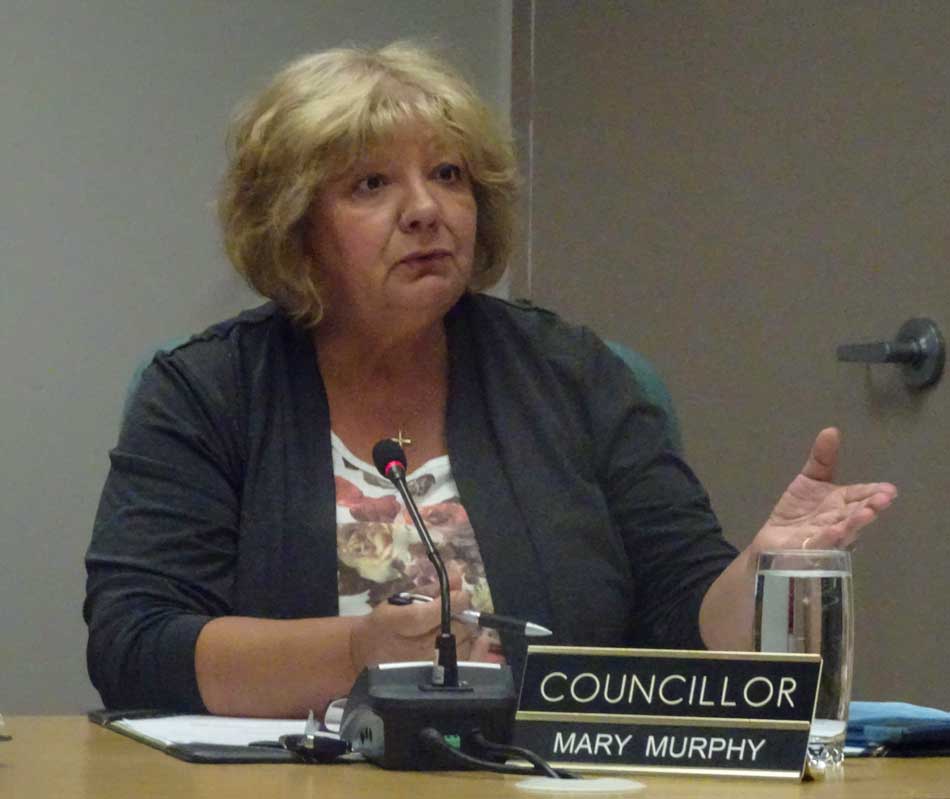 Councillor Larry Walker, who pointed out that he likes of fish along the river, who supported Murphy’s motion told his colleagues to get their act together and “do something about the riverbank.” He later proposed that if council does nothing, perhaps Kitimat should hold a referendum on the future use of the river bank.

The majority on Council were more cautious, while acknowledging problems. They pointed out that the many of the campers both on the east bank and on the west bank at Radley Park patronize local businesses during the summer months.

While there was wide discussion on social media before the council meeting, only three people showed up to give their opinions, mostly concerned about permitting access to the river for people with mobility issues or small children.

There were many comments and questions about how other areas police provincial Crown Land, with some saying that some places restrict access to only a couple of days. However, no one either on Council or staff had any idea of what exactly other locations are doing, if anything.

There were no details of how the working group would operate and who would participate. During the debate it was pointed out that as well as the province, participants would have to include Rio Tinto, LNG Canada and DFO. As well, Council did not set a deadline for the working group to report back.

As Murphy pointed out back in 2014, Fisheries and Oceans refused to attend a Council meeting or make a public presentations on its views of the river bank situation. (DFO snubs District of Kitimat Council for a second time )  while offering to meet with staff “they will continue to meet at an operational level to provide information on DFO’s regulatory role.”  That, of course came during the Stephen Harper administration which severely restricted any public participation by the civil service on environmental issues. Whether the Justin Trudeau government has changed that policy remains to be seen.

Was the rain storm an anomoly?

During the debate, Mayor Phil Germuth, pointed to the sudden onslaught of rain during Sunday and Monday September 10 and 11 and called it “an anomaly” which means that Kitimat should not overreact to the storm. 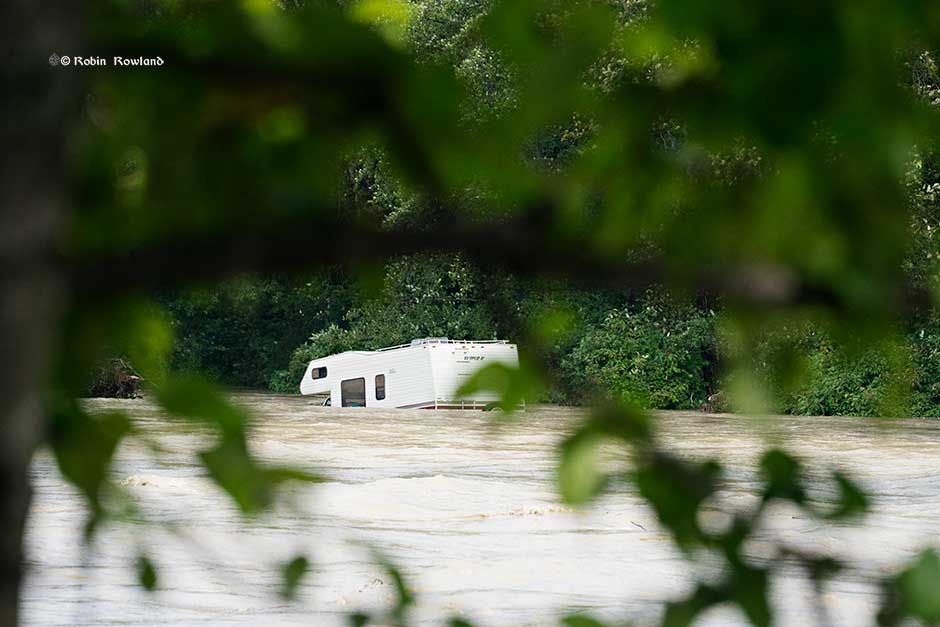 However, as The New York Times pointed out after Hurricane Harvey hit Texas, scientists have been warning for years that

Climate science has repeatedly shown that global warming is increasing the odds of extreme precipitation and storm surge flooding. Refusing to acknowledge this impairs our ability to prepare for future extreme weather and endangers American lives and property.

And another opinion article in the Times during Hurricane Harvey noted:

Scientists can now even evaluate how much climate change has increased the odds of individual extreme events, including rainfall and flooding.

As the 2015 American Meteorological Society report quoted by The Times indicates, those  unpredictable and extreme events don’t just include floods but the widespread forest fires in Alaska in 2014 and we all know how bad the fire season has been in British Columbia this year. 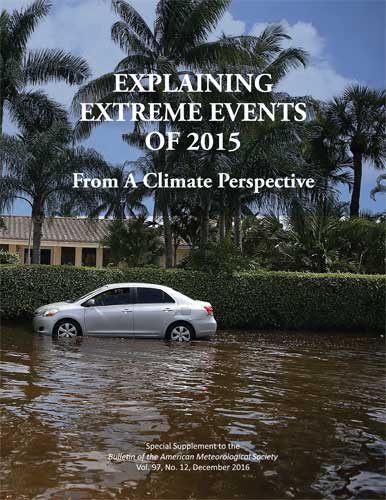 As Noah Diffenbaugh  of Standford University pointed out in The Times

Being smart about managing exposure and vulnerability is critical to reducing risks. But doing so requires acknowledging that global warming is happening, that humans are the primary cause and that the odds of catastrophes like Hurricane Harvey are increasing. 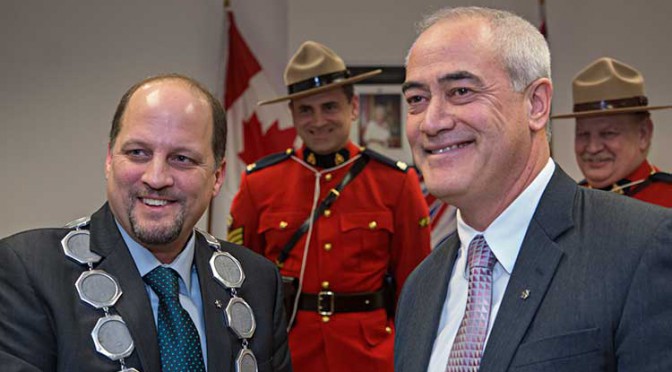 The District of Kitimat’s new council was sworn in a special ceremony at the Council Chambers at Northwest  Community College, Monday, Dec. 1, 2014.