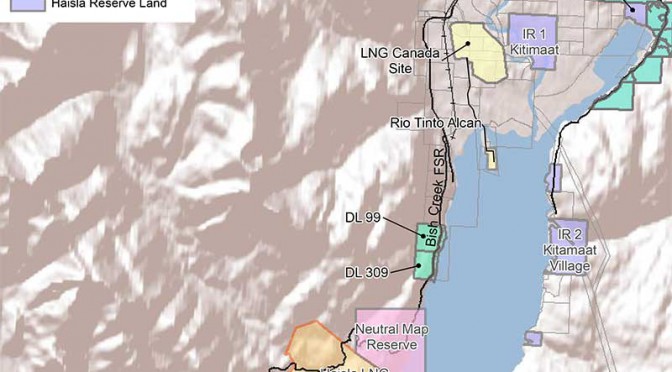 The Haisla Nation’s plan for entering the LNG business is based on the idea that “it is anticipated that the Haisla Projects will be developed using a business model based on controlling two components of the value chain: land and pipeline capacity” according to its application to the National Energy Board for a natural gas export licence.

Cedar LNG Development Ltd., owned by the Haisla Nation, filed three requests for export licences with the NEB on August 28, under the names Cedar 1 LNG, Cedar 2 LNG and Cedar 3 LNG.  Another name used in the application is the “Haisla Projects.”

The 25-year export licence request is standard in the LNG business; it allows export of natural gas in excess of projected North American requirements. Thus like the NEB hearings for the Kitimat LNG and LNG Canada projects it is not what is called a “facility” licence which is what Enbridge Northern Gateway requested.

The project anticipates six “jetties” that would load LNG into either barges or ships at three points along Douglas Channel, one where the present and financially troubled BC LNG/Douglas Channel Partners project would be.

A second would be beside the BC LNG project, which may refer to the Triton project proposed by  Pacific Northern Gas parent company Altagas.

Both are on land now owned by the Haisla Nation in “fee simple” land ownership under Canadian law.

The other four would be on land surrounding the current Chevron-led Kitimat LNG project along Douglas Channel and in the mountains overlooking Bish Cove which the Haisla have leased.

The move last week and the revelation of the Haisla’s plans for the land are a cumulation of Haisla Nation Chief Counsellor Ellis Ross’s idea of restoring more of the First Nation’s traditional territory by buying or leasing the land using standard Canadian land law and at the same time getting around some of the more restrictive provisions of the Indian Act that apply to reserve land.

Just how the Haisla will go into the pipeline business is not as clear as the First Nation’s acquisition of the land. The application says:

The pipeline capacity required to transport sourced LNG to the Haisla Projects will include a mix of new and existing pipeline and infrastructure. The Haisla are in the advanced stages of negotiating and drafting definitive agreements with the major gas producers and pipeline transmission companies located in the vicinity with respect to securing pipeline capacity. It is expected that the Haisla Projects will rely on the Haisla’s business partners or customers to source gas from their own reserves and the market.

With the Haisla basing their business strategy on land and pipelines, the First Nation’s strategy is looking for  flexibility in what is a volatile and uncertain market for LNG.

The application says the Haisla “are currently in advanced stage discussions and negotiations with a number of investors, gas producers, LNG purchasers, pipeline transmission companies, technology providers and shippers. As such, the particular business models have yet to be finalized. However, it is anticipated that between the various Haisla Projects, multiple export arrangements may be utilized.”

As part of the idea of flexibility, the actual LNG infrastructure will be constructed and operated with potential partners. That is why there are three separate applications so that each “application will represent a separate project with independent commercial dealings with investors, gas producers, LNG purchasers, pipeline transmission companies, technology providers and shippers.”

The Haisla say that they are “working with a number of entities to develop business structures and partnerships to provide transaction flexibility, adequate financing, modern technology, local knowledge, and marketing expertise specific to Asian targets. The separate projects will accommodate expected production and demand and will also allow for a number of midlevel organizations to be involved with the various projects as well as traditional major gas producers and LNG purchasers.”

The Haisla are working with the Norwegian Golar LNG which had been involved in the stalled BC LNG project, using a Golar LNG’s vessels and technology, using a new design that is now being built in Singapore by Keppel Shipyard.

The filing says the project will “be developed using either barge-based or converted Moss-style FLNG vessels. The terminals will consist of vessel-based liquefaction and processing facilities, vessel-based storage tanks, and facilities to support ship berthing and cargo loading”

The jetties to be used for the Haisla Projects may be either individual FLNG vessels or “double stacked”, meaning that the FLNG vessels are moored side-by-side at a single jetty. The Haisla have conducted various jetty design work and site /evaluation studies with Moffat and Nichol.

The Haisla Projects anticipate that the construction will be in 2017 to 2020, “subject to receiving all necessary permits and approvals” and is expected to continue for a term of up to twenty five years. There is one warning, “The timelines of the Haisla Projects will also depend on the contracts and relationships between the Applicant and its partners.”

The filing goes on to say:

Haisla Nation Council and its Economic Development Committee are committed to furthering economic development for the Haisla. The Haisla’s business philosophy is to advance commercially successful initiatives and to promote environmentally responsible and sustainable development, while minimizing impacts on land and water resources, partnering with First Nations and non-First Nations persons, working with joint venture business partners, and promoting and facilitating long-term development opportunities.

The Haisla Applications will allow the Haisla to be directly involved as participants in Canada’s LNG industry, rather than having only royalty or indirect interests. The Kitimat LNG and LNG Canada projects, and the associated Pacific Trails Pipeline and Coastal Gas Link Pipeline, have increased economic opportunities in the region and the Haisla are very supportive of these projects locating within the traditional territory of the Haisla. The support of the Haisla for these two projects reflects a critical evolution of the Haisla’s economic and social objectives.