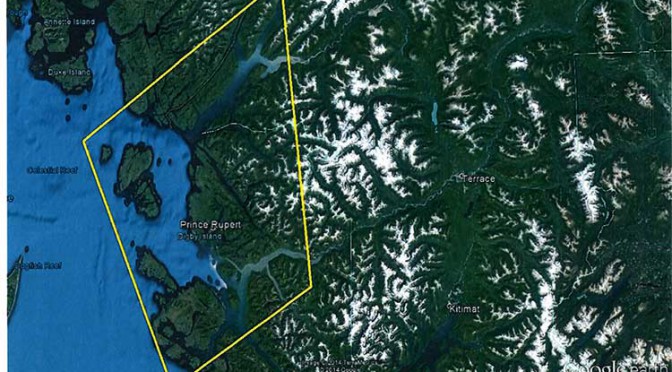 The province of British Columbia has posted a request for bids for an extensive air shed study for Prince Rupert, a study that has much wider scope that the controversial Kitimat air shed study. The maximum cost for the study is set at $500,000.

The BC Bid site is asking for

a study of potential impacts to the environment and human health of air emissions from a range of existing and proposed industrial facilities in the Prince Rupert airshed, further referred to as Prince Rupert Airshed Study (PRAS) in North West British Columbia.

In addition to “stationary sources” of nitrogen dioxide, sulphur dioxide and particulate matter, “the impact assessment will also include rail and marine transportation sources of these contaminants in the study area.”

The request for proposal goes on to say:

The identified sources will be used for air dispersion modelling to determine how the contaminants in various aggregations (scenarios) will interact with the environment, including surface water, soils, vegetation and humans. Interactions of interest will include:

Water and soil impact predictions will be based on modelled estimates of critical loads for both media, given existing and predicted conditions in the airshed. Vegetation and human health impact predictions will be based on known thresholds of effects, given modelled existing and predicted conditions (contaminant concentrations) in the airshed.

Although the documents say that the Prince Rupert study will be based on the same parameters at the Kitimat air shed study, the Kitimat study only looked at sulphur dioxide and nitrogen dioxide, and did not include particulate matter.

A draft report is due by March 15, for review by the province and affected First Nations and subject to peer review. The District of Kitimat was not asked for comment on the study  on that air shed study, even though scholars as far away as Finland were asked to review it. It appears that Prince Rupert itself is also excluded from a chance to review the study. The final report is due on May 15.