The British Columbia Environmental Appeal Board has upheld Rio Tinto’s plans for sulphur dioxide emissions in the Kitimat airshed and dismissed the appeal from residents Emily Toews and Elisabeth Stannus.

The 113 page decision was released by the EAB late on December 23. It contains a series of recommendations for further studies and monitoring of the health of Kitimat residents. In effect, the EAB is asking the province (which is all it can do) to spend money and create a new bureaucracy at a time when Kitimat’s medical community is already short staffed and under stress.

By December 31, 2016…. engage with Ministry executive to secure their support for, and action to encourage, a provincially-led Kitimat region health study, based on the development of a feasibility assessment for such a study.

Based on the evidence and submissions made by each of the parties, the EAB confirmed our permit amendment.
Although it is welcome news for Rio Tinto that the MOE Director’s decision was upheld, and the rigor and cautious approach of the science were confirmed by the EAB, we also recognize that there is more work to do to address community concerns regarding air quality in the Kitimat Valley.
In providing their confirmation, the EAB included a series of recommendations. Over the coming months, we will be working to fully assess them and we will continue to involve the local community including residents, stakeholders and our employees as we do so, noting that some of the recommendations have already started to be implemented.
I would like to take this opportunity to thank the residents of Kitimat, our valued stakeholders and our employees for their support during this process. At Rio Tinto, we are committed to protecting the health and well-being of our employees, the community, and the environment as we modernize our BC Operations. 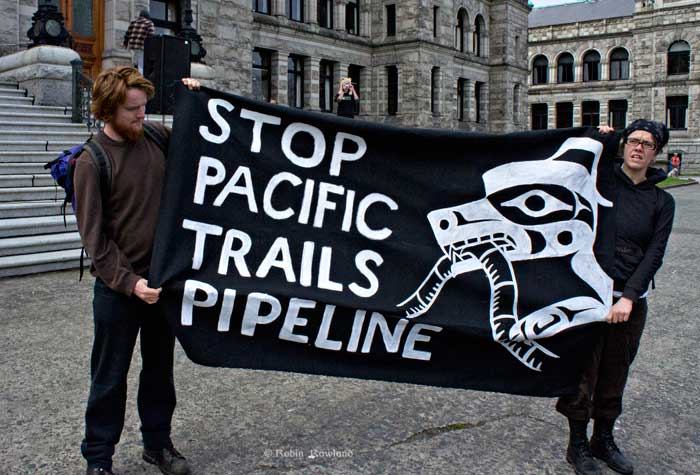 A couple from Vancouver, who refused to give their names, unfurl an anti-Pacific Trails Pipeline banner at the British Columbia legislature in Victoria, Sunday, April 15, 2012. The man said he against all pipelines and that he was supporting the Wet’suwet’en First Nation. About 1,000 people marched through downtown Victoria to oppose the Enbridge Northern Gateway pipeline and coastal tanker traffic. (Robin Rowland/Northwest Coast Energy News)

The BC Environmental Assessment Office has approved an application to increase the capacity of the proposed 463 kilometre Pacific Trails Pipeline from the Summit Creek natural gas hub near Prince George to Kitimat.

The $1 billion pipeline project is crucial to the success of the KM LNG liquified natural gas export terminal at Kitimat, a partnership of Apache Corp., Ecana and EOG Resources.

The main thrust of the application was to increase the capacity of the pipeline to 1066.8 mm (42 inch) from the originally proposed 914 mm (36 inch). Pacific Trails will change the location of pump stations since the original proposal was for an import pipeline while now it is for export. There are also minor changes.

The proposal was generally considered pro forma since the main environmental review was completed under the original application approval in 2008 and the BC government was only considering the changes proposed by PTP.

The government report says officials were convinced that Pacific Trails would be able to handle problems with increased traffic and any potential risk involved in drilling under watercourses.

The Haisla submitted a number of technical questions about the impact of the larger pipes. While the BC Assessment office noted in its report that the Pacific Trails Pipeline is generally outside Haisla traditional territory, it is clear from the documentation that one of the Haisla concerns are any impacts on the Kitimat River watershed, as the questions concern the Stuart and Endako Rivers, the Morice and Gosnell Creeks and Weedene and Little Wedeene Rivers. The EAO ruled that the Haisla questions were outside the scope of the amendment or should be addressed in the “permitting process.”

Some Wet’suwet’en houses have been vocal in their opposition to the Pacific Trails Pipeline crossing their traditional territory, The Office of the Wet’suwet’en filed a strong objection to certain parts of the plan.

Given that the Minister of Natural Resources Joe Oliver and the federal government are now working to fast tracking all major resource projects, a comment from David de Wit, Wet’suwet’en natural resources manager is significant:

Fast tracking projects may result in overlooking important details [that] can have detrimental consequences. It is important to point out that the diligence required post-certification to ensure that impacts and effects on important resources are prevented or avoided is not satisfactory. This leaves the burden and legacy of any impacts to be borne by the Wet’suwet’en.

The letter goes on

We have invested considerable time and resources in the BC EAO review only to find that the level of detail required pre-certification leaves far too many unanswered questions critical for ensuring environmental effects and identification of potential infringements to our Title and associated rights from the project are avoided or minimized.

The EAO responded by saying the issues were covered by the original assessment and through the Oil and Gas Commission permit process. The letter from the Wet’suwet’en was, however, passed on to the Executive Director for further consideration

The Pacific Trials Pipeline, also known as the the Summit-to Kitimat pipeline will supply the Kitimat LNG project, a venture of the KM LNG partners, Apache Corp., Encana Corp., Apache Canada and EOG Resources. The $4.5-billion LNG terminal and facility will likely be operational by 2015, depending on how long it takes for the partners to line up Asian buyers.

Wet’suwet’en submission to the BC EAO  (pdf)