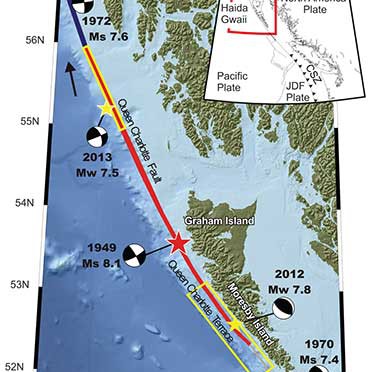 A “devastating megathrust earthquake” could hit Haida Gwaii sometime in the future, according to Canadian and US studies carried out after the magnitude 7.8 earthquake off Haida Gwaii on Oct. 27, 2012 and the 7.5 magnitude quake off Craig, Alaska, a few weeks later on Jan. 5, 2013.

The 2004 Indian Ocean earthquake and the 2011 Tōhoku earthquake in Japan, both accompanied by major tsunamis are recent examples of “great” (higher than magnitude 8.0) megathrust earthquakes. Most of the concern on the west coast has been the likelihood of a megathrust earthquake on the Cascadia Fault on the Juan de Fuca plate that stretches from northern California to the middle of Vancouver Island.

The 2012 Haida Gwaii main shock was the second largest seismic event in Canada since the establishment of a modern seismograph network. The first was the 1949 Haida Gwaii/Queen Charlotte earthquake with a magnitude of 8.1 That 1949 Haida Gwaii earthquake was a strike-slip event, where the plates move side-to-side, similar to the 1906 San Francisco earthquake and other quakes on the San Andreas Fault in California.

The 2012 Haida Gwaii earthquake is characterized in the studies as a “mini-megathrust” event, where part of the crust is pushed upward, meaning that a larger megathrust could have much more destructive consequences from both the earthquake and a possible tsunami.

The new studies show that the Pacific and North America plate boundary off the coast of British Columbia and southeastern Alaska creates a system of faults capable of producing very large earthquakes. The scientists conclude that while the two earthquakes in 2012 and 2013 released strain built up over years on the tectonic plates, those events did not release strain along the Queen Charlotte Fault off the west coast of Haida Gwaii. That means the fault remains the likely source of a future large earthquake.

A special issue of the Bulletin of the Seismological Society of America (BSSA), released Monday, April 6, 2015, contains 19 scientific and technical papers, outlining the results of the work carried out over the past two years.

The team estimated the rupture dimension of the 2012 Haida Gwaii earthquake to be about 120 kilometres long at a depth of about 30 kilometres.

The Craig earthquake ruptured the Queen Charlotte fault over a distance of more than 100 kilometres and at a depth of about 20 kilometres.

“The study of these two quakes revealed rich details about the interaction between the Pacific and North America Plates, advancing our understanding of the seismic hazard for the region,” said Thomas James, research scientist at Geological Survey of Canada.

The studies conclude that the interaction between the plates off Haida Gwaii is much more complex than previously believed. Before the 2012 earthquake, the Queen Charlotte Fault, a strike-slip fault similar to the San Andreas Fault in California, was believed to be the dominating tectonic structure in the area. The 2012 tremor confirmed the existence of a previously suspected thrust fault beneath what is called the “Queen Charlotte Terrace,” to the west of the Queen Charlotte Fault, where the Pacific plate is sliding at a low angle below the North American plate.

The Queen Charlotte Terrace, which is about a kilometre below the surface of the ocean, is built up of layers of sediment, several kilometres thick, scraped off the oceanic plate as it subducts under the North American plate. It may also include some fragments of oceanic crust. For most of the terrace, it is “present as a clearly defined linear feature,” but the study adds: “north of about 53.5° N, a complex pattern of ridges and valleys appears.”

The earthquake was “essentially a mini-megathrust earthquake along the dipping plate interface of a subduction system,” one of the scientific papers says. The epicenter of the Haida Gwaii main shock was located about five kilometres landward (northeast) of the Queen Charlotte Fault. That probably means that the rupture was near the bottom of the locked plates, where the plate motion’s side to side movement is also thrusting downward. Significant aftershocks appeared to cluster on the periphery of the main rupture zone with most of the aftershocks occurring seaward to the west.

The scientists used GPS observations of crustal motion to locate the earthquake’s rupture offshore to the west of Haida Gwaii.

Honn Kao, a seismologist with the Geological Survey of Canada said, “This was an event the thrust interface of the plate boundary system, confirming that there is a subduction system in the Haida Gwaii area.

“The implication of a confirmed subduction zone is that in addition to the Queen Charlotte Fault, we now have another source which can produce devastating megathrust earthquakes in the area,” said Kao.

The study of the Haida Gwaii tremor looked at the causative faults, the rupture processes and depths of the main shock and sequence of strong aftershocks.

The Haida Gwaii earthquake generated a significant tsunami that left deposits indicating run-up exceeding 3 metres (maximum 13 metres) in a number of bays and inlets along about 230 kilometres along the west coast of Haida Gwaii. In Hawaii, a 0.8 metre wave was measured on a tide gauge.

In Queen Charlotte City perceptible shaking lasted for one and half to two minutes, with very strong shaking for about 30 seconds. The earthquake was felt as far away as Yukon Territory, Alberta, and Montana.

The study says “Damage was limited, in part owing to the sparse population, but also because of the seismic resistance of the generally low rise, wood-frame buildings on the islands. Felt intensities were at expected values close to the source zone, but regional intensities were smaller than predicted.”

The Haida Gwaii rupture also shook southeastern Alaska. The northwest direction of ground motion then may have influenced the timing of the Craig earthquake a few weeks later in January 2013. That earthquake occurred farther north in southeast Alaska, where relative plate motion is nearly parallel to the Queen Charlotte fault.

The Haida Gwaii aftershocks clustered around the periphery of the rupture zone, both on the seaward and landward side of the plate boundary and reflected what the study calls “normal faulting behavior–caused by the bending, extending or stretching of rock– rather than the thrust faulting of the main shock.” The pattern of aftershocks is similar to those observed after the 2011 Japanese megathrust earthquake.

“Our observations of normal faulting imply that the main shock of the Haida Gwaii earthquake dramatically altered the stress field in the rupture zone, especially in a neighboring region,” Kao said.

The distribution of aftershocks occurred to the north of a previously identified seismic gap where large earthquakes have not occurred in historic times. The gap is located to the south of the where 1949 magnitude 8.1 Queen Charlotte earthquake ruptured.

Though the Haida Gwaii earthquake may have activated some part of the Queen Charlotte Fault, Kao said, it was limited and did not relieve stress along the seismic gap.

The Haida Gwaii event confirmed substantial seismic and tsunami hazard from large thrust events on the plate margin along the southern Queen Charlotte fault. It occurred where relatively young oceanic lithosphere under thrusts North America and in some ways is an analog for the much larger megathrust earthquakes known to occur on the Cascadia subduction zone to the south, where the young Juan de Fuca plate and other small plates subduct beneath North America. The Haida Gwaii earthquake had a complex pattern of main shock rupture and aftershocks and a large tsunami.

The Geological Survey of Canada plans further studies to understand the formations off Haida Gwaii.
One question to ask is if there are any records of major earthquake events in the past history of Haida Gwaii. The study notes that the impact of the tsunami was relatively minor “in this region with steep rocky coastlines.” That means there are limited sources of coastal sediments that can be checked for past events. It adds: “Low-elevation lakes, ponds, and bogs may offer the best opportunities for paleotsunami studies” warning that large earthquakes in the past that produced tsunamis may have left little evidence in the “paleoseismic record of Haida Gwaii and similar settings worldwide.”

Megathrust earthquakes occur at subduction zones at destructive plate boundaries where one tectonic plate is subducted (forced underneath) by another. These interplate earthquakes are the planet’s most powerful, with moment magnitudes that can exceed 9.0. Since 1900, all earthquakes of magnitude 9.0 or greater have been megathrust earthquakes. During the rupture, one side of the fault is pushed upwards relative to the other, and it is this type of movement that is known as thrust. The displacement of the ocean in a thrust can trigger a tsunami.

Transform fault
A transform fault is one where the motion is predominantly horizontal. Those faults end abruptly and are connected on both ends to other faults, ridges, or subduction zones. The best-known (and most destructive) are those on land at the margins of tectonic plates. Transform faults are the only type of strike-slip faults at plate boundaries show strike-slip or side-to-side in movement.

Historic earthquakes.
The 1949 Haida Gwaii quake was one of the largest in the recorded history of North America.

The largest known earthquake along the coast was the megathrust event on the Cascadia fault on January 26, 1700 where the Juan de Fuca plate ruptured for about 1,000 kilometres along from what is now northern California to Vancouver Island, estimated at magnitude 9.0. The dating is based on a tsunami that hit Japan that had no associated local earthquake as well studies of tree rings from the remains of trees downed in the tsunami.