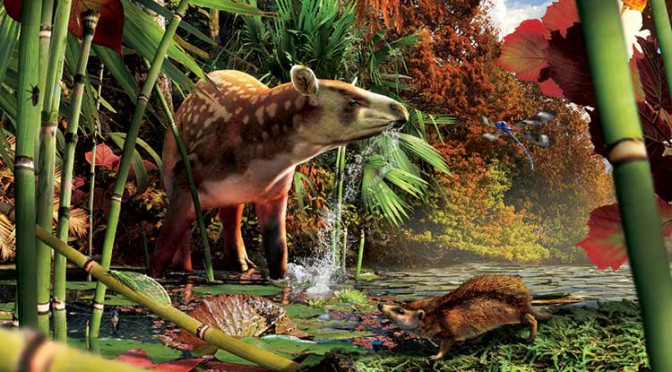 About 52 million years ago what is now the Bulkley Valley was home to a tiny hedgehog  and an ancient ancestor of tapirs, who lived on the shores of a placid lake surrounded by  a lush upland forest.

The newly discovered fossils at Driftwood Canyon near Smithers are significant advance in the study of the ancient history of the region. That’s because while the Driftwood Canyon Provincial Park is known for beautifully preserved fossils of leaves, fishes and insects, these are the first mammalian remains found at the site.

The fossil hedgehog and tapir are even more significant because at the time they lived near an upland lake, Earth was going through a period of rapid global warming, now called the Paleocene-Eocene Thermal Maximum.

In the past couple of years, climatologists and paleontologists have started to play closer attention to the Thermal Maximum period in hopes of understanding what could happen during climate change today.

Driftwood Canyon first became famous in 1977 with the discovery of oldest known ancestor of salmons, Eosalmo driftwoodensis, which lived in an  Eocene lake at Driftwood Canyon.

Today’s  study says the ancient hedgehog is a species hitherto unknown to science. It is named Silvacola acares, which means “tiny forest dweller,” since this minute hedgehog likely had a body length of only two to two and half inches or five to six centimetres, about the size of an adult human thumb.

“It is quite tiny and comparable in size to some of today’s shrews,” said Dr. Jaelyn Eberle of the University of Colorado, lead author of the study.   She speculated Silvacola may have fed on insects, plants and perhaps seeds.

Did it have quills like contemporary hedgehogs? “We can’t say for sure,” Eberle said. “But there are ancestral hedgehogs living in Europe about the same time that had bristly hair covering them, so it is plausible Silvacola did too.”

The  delicate fossil jaw of Silvacola was not freed from the surrounding rock as is typical for fossils. Instead it was studied using an industrial high resolution CT (computed tomography) scanner at Penn State University so it could be studied without risking damage to its tiny teeth.

Hedgehogs are no longer found naturally  in North America. Modern hedgehogs and their relatives are restricted to Europe, Asia, and Africa. Hedgehogs have become quite the rage as pets in North America in the past several years. The most common hedgehog pet today is the African pygmy hedgehog, which is up to four times the length of the diminutive Silvacola.

The other mammal, about the size of a medium-sized dog,  discovered at the site, is Heptodon, is an ancient relative of modern tapirs, which resemble small rhinos with no horns and a short, mobile, trunk or proboscis.

“Heptodon was about half the size of today’s tapirs, and it lacked the short trunk that occurs on later species and their living cousins. Based upon its teeth, it was probably a leaf-eater, which fits nicely with the rain forest environment indicated by the fossil plants at Driftwood Canyon,”  Eberle said.

Most of the fossil-bearing rocks at Driftwood Canyon formed on the bottom of an ancient lake and are well-known for their exceptionally well-preserved leaves, insects, and fishes.

“The discovery in northern British Columbia of an early cousin to tapirs is intriguing because today’s tapirs live in the tropics. Its occurrence, alongside a diversity of fossil plants that indicates a rain forest, supports an idea put forward by others that tapirs and their extinct kin are good indicators of dense forests and high precipitation,” she said.

Fossil plants from the site indicate the area seldom experienced freezing temperatures and probably had a climate similar to that of Portland, Oregon, located roughly 1,126 kilometres or 700 miles to the south.

The current and previous studies have shown the hedgehog and tapid lived on the shores of a lake surrounded by a mixed conifer-broadleaf forest with redwoods, such as Metasequoia and Sequoia, cedars, fir, larch, golden larch, spruce, pine as well as rare ginkgoes. There were also broadleaf deciduous trees such as alder, birch,  sassafras, elms, and relatives of the oak family. In the lake were Azolla, a floating fern,  which are frequently found as preserved mats in the fossil shale of the cliff at Driftwood, which together with the fine preservation of the insects indicate a quiet water lake.

The remains on the hedgehog were found in the fossil lake bed while the tapir was found in river sediments.

“Driftwood Canyon is a window into a lost world – an evolutionary experiment where palms grew beneath spruce trees and the insects included a mixture of Canadian and Australian species. Discovering mammals allows us to paint a more complete picture of this lost world,” said Dr. David Greenwood of Brandon University, a co-author of the study.

“The early Eocene is a time in the geological past that helps us understand how present day Canada came to have the temperate plants and animals it has today. However, it can also help us understand how the world may change as the global climate continues to warm.”

The Driftwood Canyon site is the northernmost of a series of Eocene lake sites spanning about 1000 kilometres that reach south from Smithers to Republic in northern Washington that the scientists call the Okanagan Highlands, with a mixture of temperate and tropical plants and animals and a high diversity of insects and plants.

While Driftwood Canyon is now among sites considered a key indicator of climate change 50 to 53 million years ago, the Harper government has cut almost all the funding for research into paleontology, not just at Driftwood Canyon but across the country, because looking for fossils doesn’t usually fit into the Conservative policy of only funding science that promotes industry.

“Within Canada, the only other fossil localities yielding mammals of similar age are from the Arctic, so these fossils from British Columbia help fill a significant geographic gap,” said Dr. Natalia Rybczynski of the Canadian Museum of Nature, a co-author of the study.

Other fossils of this age come from Wyoming and Colorado, some 4,345 kilometres or 2,700 miles to the south of the Arctic site of Ellesmere Island. In addition, sources have told Northwest Coast Energy News that the provincial budget for Driftwood Canyon, despite its significance, is the same  as other small parks of that size, with virtually no security to prevent fossils leaving the park, either in the hands of professional looters or if they are picked up and taken home by visitors.

There are consistent reports that looted fossils from Driftwood Canyon are regularly showing up at fossil shows in the United States.

Sources have told Northwest Coast Energy News that the provincial government has ignored requests to improve security at Driftwood Canyon because it is considered a small (just 21 hectares) low priority park off the main tourist routes, rather than a significant fossil site.

The mammal fossils were discovered in 2012 before the budget cuts and are now in the Royal British Columbia museum in Victoria. The fieldwork was supported by Natural Sciences and Engineering Research Council of Canada.

The study “Early Eocene mammals from the Driftwood Creek beds, Driftwood Canyon Provincial Park, Northern British Columbia ” was published in the July 8, 2014 edition of the Journal of Vertebrate Paleontology.