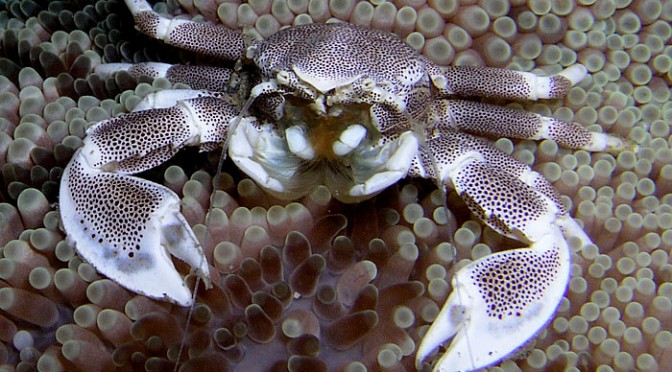 Climate change, which will raise ocean temperatures and more carbon dioxide in the atmosphere which will increase the acidification of the oceans will have the greatest affect on the intertidal zones—and a key indicator species, crabs and similar creatures.

A study by San Fransisco State University published today in the Journal of Experimental Biology used the small (usually 15 millimetre) porcelain crab  to simulate the conditions that will come to the intertidal zone and affect other species including the larger dungeness crab. ( According to Wikipedia, porcelain crabs are an example of carcinisation, whereby a non-crab-like animal,in this case a relative of a squat lobster evolves into an animal that resembles a true crab.)

Studies have shown that as climate changes, coastal ecosystems will be see “have increased extremes of low tide-associated thermal stress and ocean acidification-associated low pH.”

The study by co-author Jonathan Stillman and his colleagues, is the first to explore intertidal zone organisms’ response to combined variation in temperature and pH, which is expected to intensify in the future due to climate change and ocean acidification.

The current and previous studies have shown that during low tide, air temperatures in the intertidal zone can fluctuate dramatically as much as 20 degrees celcius over short periods of time up to six hours. Temperatures can reach extremes when low tides coincide with hot days. Marine intertidal organisms tolerate these natural temperature fluctuations, yet it is known that they are limited in their scope to tolerate future warming.

In the simulation porcelain crabs  were placed in a specially built aquarium designed to simulate the natural environment, including tidal changes. At low tide, with the crabs exposed to the air, the researchers varied the temperature to mirror day-to-day changes the crabs currently experience — such as cooler air on a cloudy day and warmer air on a sunny day — as well as conditions expected in the future. At high tide, with the crabs submerged, they adjusted pH levels in the same fashion.

As the temperature rose and pH levels dropped — conditions expected in the future due to climate change — the crabs’ ability to withstand heat increased. But at the same time, researchers found, the crabs’ metabolism decreased. In addition, the combined effect of higher temperatures and lower pH levels was greater than the effect of either of those two factors alone.

“When you combine these things together, they slow down metabolism, which means crabs become sluggish and have less overall energy to do things like growth or reproduction,” Stillman said. “If their whole energy budget is a pie, then in the future the size of the pie is going to be smaller, and a larger percentage of it is going to be taken up by survival and maintenance.”

The study says that although porcelain crabs are not particularly important to humans — they are not fishery crabs such as Dungeness — they are an important food source for coastal fish, birds and other crabs.

The results suggest “there is a potential for adverse long-term ecological consequences for intertidal ectotherms”– that is creatures that depend on the external temperatures to regulate body heat– “exposed to increased extremes in pH and temperature due to reduced energy for behavior and reproduction.”

The porcelain crabs can also be seen as a model for scientists to understand the impacts of climate change and ocean acidification on crustaceans in general, Stillman said. Future studies will look at the impact of varying temperature and pH changes on different species of porcelain crabs, juvenile crabs and crab embryos.