A Portuguese man was fined $1 in Terrace Provincial Court Wednesday Sept. 2 and ordered to donate $5,000 to the Heritage Conservation Trust Fund for hitting a swimming deer on the head off Bish Cove in Douglas Channel on May 14.

Rodolfo Lopes, previously misidentified in court documents as Martins-Lopes, pleaded guilty in to one count under the BC Wildlife Act of harassing wildlife with a motor vehicle.

Evidence in the case showed that Lopes hit the deer on the head with a jig or gaff in an attempt to bring it on board. The deer managed to escape and make it to shore.

Such donations are permitted under the BC Wildlife Act. The money, which Lopes originally paid in bail, will be allocated to conservation efforts in the Kitimat region.

Other charges against Lopes, a former supervisor at the Rio Tinto Alcan Kitimat Modernization Project, including one count of causing unnecessary pain and suffering to an animal under the Criminal Code were stayed by the Crown.

Provincial Court Judge Terence Wright also prohibited Lopes from approaching wildlife for the next two years unless required by his employment.

Lopes did not return from Portugal for the hearing. Vancouver lawyer Don Sorochan, QC, appeared on his behalf.

Crown counsel Corinne Baerg said Lopes was a supervisor at Brasco, one of the subcontractors at KMP, and had hired a fishing guide to help celebrate both the end of their work at the aluminum smelter modernization project and Lopes’ planned wedding in August.

After a day of what was apparently unsuccessful fishing, Lopes and five others were on board the boat, returning to Kitimat, when a deer was spotted swimming in Douglas Channel.

According to the submission, the guide then took the boat “ running up alongside” the deer. At that point Lopes hit the deer on the head with what some witnesses said was a jig and others said was a gaff in attempt to haul it on board. The deer was able to free itself, swam to shore and disappeared into the bush.

After Conservation Officers were told  about the incident by residents in Kitimat who saw a video of the fishing trip on Facebook, one of the men on the boat voluntarily surrendered cell phone video and other evidence was seized under a search warrant. The video was not shown in court.

Because Lopes was not a Canadian resident he was arrested and spent time in custody before being granted bail and was permitted to return to Portugal.

In his defence submission, Sorochan said Lopes was not familiar with Canadian hunting and wildlife laws and was totally dependent on the “advice of his professional guide.” Sorochon told the court that the incident had become exaggerated by people gossiping on social media.

Sorochan told the court that Lopes began with Brasco as a bricklayer in 1996 and had quickly risen to supervise construction projects all over the world. The lawyer called the attempt to get the deer “a naive impulse” by a man who was trying to be macho in an unfamiliar setting.

He submitted letters of reference for Lopes from Brasco, another company and a Kitimat union.

Wright, in confirming the proposed sentence, said that given the circumstances, the fine and donation was the “appropriate penalty.”

Wright noted that it was not possible to ascertain how badly injured the deer was. He also noted that Lopes did not have a criminal record and his employer had praised his work in many parts of the world.

Andreas Handl, who runs Kitimat’s Kingfish Westcoast Adventures, was scheduled to appear in a Kitimat court Thursday, Sept 3, but the appearance was adjourned until October.

He is charged under the B.C. Wildlife Act with harassing wildlife with a motor vehicle and hunting wildlife while swimming, as well as causing unnecessary pain and suffering under the Criminal Code. 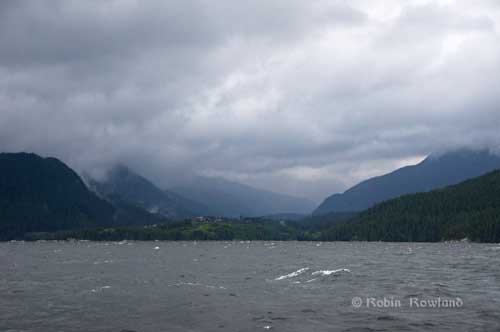