Chevron, the partner with Apache in the KM LNG (also known as Kitimat LNG) project at Bish Cove, said Sunday that the company will hold an open house in Kitimat on the controversial Clio Bay reclamation project.

Chevron says there will be a public open house at Riverlodge Tuesday, October 8 from 4 pm to 8 pm.

In an e-mail to politicians and local groups, including Douglas Channel Watch, Marc Douglas, a senior advisor for Chevron, based in Calgary, invited local stakeholders for a series of one hour meetings the same day at the KM LNG offices in City Centre.

Chevron Canada invites you to a meeting to discuss the Clio Bay Marine Life Restoration Project.
This proposed project would see Chevron excavate marine clay from the Kitimat LNG construction site at Bish Cove and work closely with the Federal Department of Fisheries and Oceans to deposit this natural material in specific locations in Clio Bay. The clay will cap-off decaying wood debris left by historic log booming operations that has accumulated on the bottom of Clio Bay, damaging the Bay’s natural ecosystem. A key goal of the project is to restore natural marine life populations in Clio Bay. Come and share your thoughts and ideas with us and learn more about this innovative restoration project. 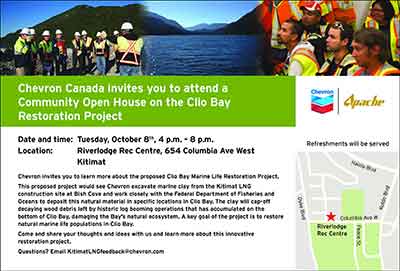 There has been growing controversy over the Clio Bay project in recent weeks. Members of the Haisla Nation and residents of Kitimat were initially told that due to the large number of sunken logs at Clio Bay, that the area was deprived of oxygen, with limited sealife and that capping the logs with clay from Bish Cove would restore the ecosystem. However, beginning with a discussion at District of Kitimat Council on September 3, more people have been challenging the idea that Clio Bay needs restoration, with fishers posting photographs of recent catches on Facebook pages.

On Sept.3, Councillor Phil Germuth told Council:  “Those logs have actually created a woody reef, where like any other reef, an ecosystem is being sustained. So to say that those logs are suffocating the life out of Clio Bay doesn’t seem to have a lot of merit.”

At the time, Chevron told the media  that they had consulted with the Department of Fisheries and Oceans and  concluded that carefully placed clay would improve the ecosystem.