A follow up study by the Department of Fisheries and Oceans on the discovery of prehistoric slope failure tsunamis in Douglas Channel concludes that the events would have had minimal impact on Kitimat but would have destroyed Hartley Bay.

The studies were filed by DFO with the Northern Gateway Joint Review Panel on Friday, November 16, following an earlier study the Geological Survey of Canada that reported the discovery of the submarine slope failures. The filing comes just three weeks after the region was shaken by a 7.7 magnitude earthquake off Haida Gwaii and a subsequent coast-wide tsunami warning.

The DFO follow up study was aimed at better understanding the dynamics of tsunamis during the two slope failure events on the southern end of Hawkesbury Island during the mid-Holecene period, between 5,000 and10,000 years ago.

The wave dynamic model study does not address the discovery by the Geological Survey of Canada of a possible fault line along Hawkesbury Island which could have been the cause of the slope failures.

The study estimates that the wave amplitude of the first tsunami reaching the proposed Enbridge Northern Gateway terminal site near Kitimat would have been about .09 to .12 metres. Since the actual wave height hitting land from a tsunami is one half of the amplitude, the height of tsunami waves reaching Kitimat at the time would have been about 60 centimetres or 23 inches. At Hartley Bay, on the other hand, the maximum estimated wave amplitude from the second tsunami would have been 15 metres, meaning a wave height of 7.5 metres or about 25 feet.

The main reason for the difference is that both the submarine slope failures occurred south of  the dogleg in Douglas Channel at Gertrude Point. That meant the configuration of the channel from Gertrude Point up to Kitimat would lessen the amplitude whereas because Hartley Bay was so close, it would be hit by a higher amplitude. The report says that because of their relatively short wavelengths, the tsunami waves undergo multiple reflections that the “high degree of scattering from the complex shoreline and bottom topography in Douglas Channel” would “combined with the flux of tsunami energy through adjoining waterways and channels” have caused a rapid decrease in the energy of the waves with distance south and north of the slide area.

The study also points out a crucial difference between the ancient slides and the two that occurred near Kitimat in 1974 and 1975, while the land near the head of the Kitimat arm were largely composed of material laid down by the glaciers, the large slope failures on Hawkesbury Island were blocks of an extremely hard igneous rock called diorite. Each of the prehistoric slides would have consisted of about 65 million cubic metres of rock.

Coastal British Columbia is an area of steep slopes, extreme seasonal variations in soil moisture, large tidal ranges, and the highest seismicity in Canada. Hazards of this form have been well documented for the coastal region of British Columbia, and other fjord regions of the world’s oceans, including Alaska and Norway. These factors increase the potential for both submarine and subaerial slope failures in the region. Such events generally take place in relatively shallow and confined inner coastal waterways, and can present hazards in terms of tsunami wave generation.

The two prehistoric submarine slides are located about 10 kilometres apart on the
slope of southern Douglas Channel, near the southern end of Hawkesbury Island

The failures are defined by scallop-shaped hollows located along the edge of the fiord wall and appear to be associated with detached blocks that extend out several hundred metres into the channel. The two block slides identified in Douglas Channel are characteristic of rigid-body submarine landslides, which differ considerably from the well-documented viscous submarine landslides with a lower specific gravity (density relative to water) of about 1.5 that occurred to the north of Douglas Channel along the inner slope of Kitimat Arm in 1974 and 1975.

The report’s modelling is “considered minimum values” because the do not include debris that would have spread into the fiord after initial slide. That debris is now buried by a thick layer of post-slide sediment. 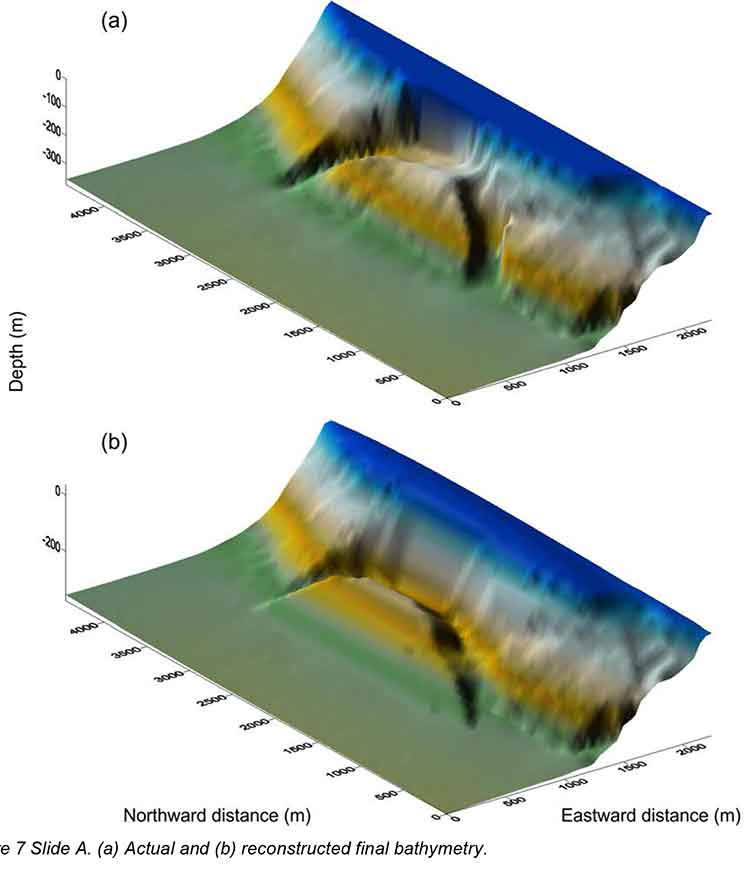 The slides would have moved down slope at about 25 metres per second, coming to rest after about 30 seconds, 250 to 350 metres from the slope at a depth of 400 metres.

The northern slide, called by the scientists Slide A:

would have generated extremely large waves in the immediate vicinity of the failure
region within a minute of the submarine landslide. Waves in the numerical simulations reach amplitudes of 30 to 40 metres at the coast near the slide area

Submarine landslides cause delays between the arrival of the first waves and the arrival of subsequent higher waves, increasing in distance from the slide, because of “reflections and non-linear interaction” along the shoreline. For Slide A, the maximum wave amplitudes at Hartley Bay would have been six metres (meaning three metre waves) “Large amplitude waves with typical periods of around 50 seconds would continue for several tens of minutes.”

The leading tsunami waves generated by Slide A reach Kitimat Arm in roughly 20 min and have small amplitudes of only a few centimetres. Although later waves have higher amplitudes, the maximum wave amplitudes (which occur 50-55 minnutes after the failure event) are still only around 0.09 to 0.12 metres.

The southern slide on Hawkesbury, called Slide B by the scientists, would have moved 400 metres before stopping. It stared at a greater depth than Slide A, with not as much vertical displacement than Slide A. That means Slide B was slower than Slide A.

would have generated large waves in the vicinity of the failure region. Simulated waves reach the coast adjacent to the slide region within a minute of the failure event, with wave amplitudes of up to 10 metres. The waves also hit the opposite site of the channel within a minute of the failure event and then take an additional minute to reach Hartley Bay where waves reach amplitudes of 15 metres/ Powerful oscillations in the bay last for tens of minutes.
Waves with high amplitudes (more than 2 metres) also occur in the southern part of Douglas Channel, and in certain locations of Verney Passage.

The the tsunami waves generated by Slide B that impact Kitimat Arm,  although still of low amplitude, were somewhat higher than those generated by Slide A, despite the fact that Slide B was located further to the south and generated less energetic waves in the source region than Slide A.

Specifically addressing the proposed site of the Enbridge bitumen terminal, as well as potential tanker traffic in Douglas Channel, the detailed explanation of the modelling accompanying the DFO report says:

If similar submarine slides were to occur again somewhere in the same general area, they could present a significant risk to navigation and to nearby shore installations and coastal communities….

As with the tsunami generation regions, the highest waves and strongest currents in any particular region of the coastal waterway would occur near the shoreline. Based on the numerical findings, tsunamis generated by submarine landslides of the form identified for the southern end of Douglas Channel would have heights and currents that could have major impacts on the coastline and vessel traffic at the time of the event throughout much of Douglas Channel, but a minor impact on water levels, currents and hence vessel traffic in Kitimat Arm. Hartley Bay, at the southern end of Douglas Channel, would be impacted by high waves and strong currents, whereas Kitimat, at the northern end of Kitimat Arm, would experience negligible wave effects. Additional modelling would be required to assess the characteristics of possible tsunamis originating beyond the area of the two identified slope failures.

At the estimated propagation speeds of about 65 metres per second, the detailed model says it takes roughly 10 to 15 minutes for the simulated waves to propagate approximately 40 to 45 kilometres to the intersection of Douglas Channel and Kitimat Arm, where peak wave amplitudes would be diminished to less than one metre. It takes another 15 minutes for the waves to reach sites near the proposed Enbridge facilities in Kitimat Arm where wave amplitudes would be reduced to a few tens of centimetres and associated currents to speeds less than a few tens of centimetres per second.