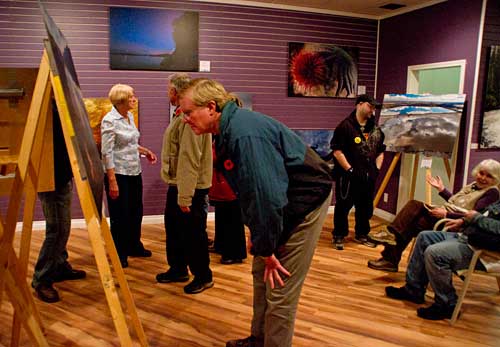 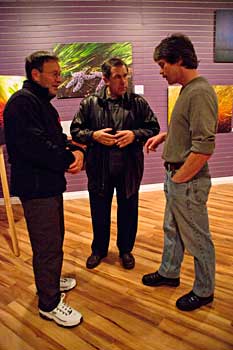 The opening reception for the Great Bear Rainforest photo exhibit was held at the City Centre venue on the evening of Saturday, Nov. 5, 2011.

The photos are by members of the International League of Conservation Photographers. The Kitimat exhibit was co-sponsored by Douglas Channel Watch and the Kitimat Valley Naturalists. 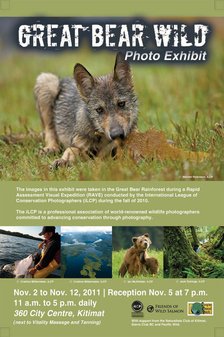 The Great  Bear Wild photo exhibit arrives in Kitimat Wednesday.  The exhibit will open in a Kitimat store front, in the City Centre mall,  for a ten day run, on Wednesday Nov. 2, 2011, continuing to Nov. 12. The opening reception is Saturday, Nov. 5 at 7 p.m.

Bringing the exhibit to Kitimat took a lot of time and effort  sources say. That’s because the District of Kitimat’s officially neutral stance on the Enbridge Northern Gateway precluded official venues such as the Riverlodge Recreation Centre and the Kitimat Museum.   The local environmental sponsors of  the exhibit also tried, unsuccessfully, sources say, to find a space in a number of other possible venues around town.

The local sponsors are Douglas Channel Watch, Kitimat Valley Naturalists and Friends of the Wild Salmon.

At the beginning of September. 2010, the International League of Conservation Photographers sent some of the world’s best shooters on a RAVE (Rapid Assessment Visual Expedition) into the Great Bear Rainforest. That photo exhibit was sponsored by Pacific Wild, Save Our Seas, the Gitga’at First Nation and National Geographic.  The shoot concentrated on the area along the coast within the boundaries of the Great Bear Rainforest and the mouth of Douglas Channel around Hartley Bay.

The 14-day expedition to the Great Bear Rainforest called upon 7
world-renowned photographers and 3 videographers to thoroughly document
the region’s landscapes, wildlife, and culture. The RAVE provided media
support to the First Nations and environmental groups seeking to stop
the proposed Enbridge Gateway pipeline project (and thus expansion of
the tar sands) and to expose the plan to lift the oil tanker ship
moratorium.

The photographers did not come any further up Douglas Channel. One ILCP photographer, Neil Evers Osborne, is photographing the route of the pipeline by air.  That project is ongoing, hanpered, in part, by this summer’s miserable weather.

Pipeline to prosperity or channel to catastrophe?

The Globe and Mail publishes an essay by Alberta author Chris Turner, author of The Leap: How to Survive and Thrive in the Sustainable Economy.

The essay appears, on the surface, to be an even handed look at the Northern Gateway Pipeline, balancing the environmental concerns with the economy.

In the end, however, Turner sides with where he lives, the province of Alberta, and his compromise could be the destruction of an area that is a thousand or so kilometres from his home.

There’s a more recent Canadian tradition, though – the one that celebrates moderation, fair play, stewardship and compromise. It gave rise to the national parks, land-claims tribunals, Nunavut, Greenpeace and the Montreal Protocol. It argues that Canada can do more with its natural abundance than extract, export and exhaust it at maximum speed. When Enbridge touts its pipeline-safety measures and marine stewardship – the double-hulled boats, the master mariners tugging the tankers carefully past Great Bear’s salmon streams – it is sincerely attempting to participate in that vision.

Yet sincerity is not the same as authenticity. Avoiding an oil spill is not a substitute for reducing greenhouse gases. The conversation has skipped ahead a generation while Canada slept. Catching up could begin with the simple agreement that the wild land of the spirit bear is no place for pipelines – but also that there will probably be a place for pipelines, at least for the near term. But that would be just the start of an honest discussion of Canada’s uncharted energy future.

For the long term health of the planet, reducing greenhouse gases is vital for the preservation of our current civilization.

For Turner, in the end, the old argument prevails, what is good for Albertans is good for the rest of the country, Alberta=Canada.

There is little doubt that the current management of Enbridge and Northern Gateway is sincere in their efforts, or as sincere as an energy company can be.  Unfortunately there is no guarantee that subsequent management will care as much after the approvals are signed and sealed and the pipeline is built.

Apart from those who may actually work for Enbridge if there is an oil spill in the future, Albertans will be able to drive into the wilderness and enjoy the Rockies while, if there is a spill, the salmon, halibut, seals, whales, eagles, gulls, grizzlies, black and kermode bears, not to mention the residents of the northwest First Nations who have been here for thousands of years and the relatively recent non-aboriginal residents will be left to clean up the mess and pay for that cleanup, while Alberta continues to prosper. 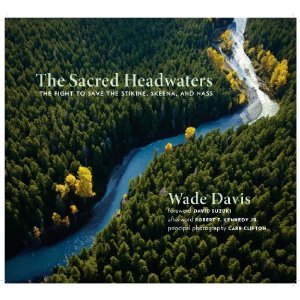