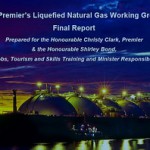 The BC Ministry of Jobs, Tourism and Skills Training today released a special report on the job prospects for the LNG industry and the policies needed on training, job mobility and use of temporary foreign workers.

Premier Christy Clark today accepted all recommendations in ‘The Premier’s Liquefied Natural Gas Working Group: Final Report’ as a road map to making sure British Columbia has the skilled labour force it needs to seize the opportunity of liquefied natural gas.

The report, produced by representatives of government, LNG proponents, organized labour, and the Haisla Nation, maps out 15 recommendations on planning, skills training, marketing and developing best practices within the LNG sector to attract a mobile workforce.

“To bring home the opportunity presented by LNG, we have to work together — government, industry, First Nations and labour,” said Premier Clark. “Everyone here today is working toward the same goal – making sure British Columbians benefit from this generational opportunity.”

Premier Clark called together the working group after her first meeting with representatives of organized labour in September 2013. At that historic meeting it was agreed that all parties would to work together to map out how they could work together to solve some of the complex challenges associated with the LNG opportunity.

“I want to thank the Premier for setting up the working group. I also want to thank the representatives of the Haisla Nation, industry, labour and government as it has been quite a process to come to agreement on the recommendations,” said Jim Sinclair, president of the BC Federation of Labour. “We were able to get beyond our differences by keeping our focus on what B.C. workers need to take advantage of the potential that lies in LNG. Now we have to ensure that the 15 recommendations are implemented. This investment in the workers of British Columbia will lead to good jobs. As we know, good jobs build a better B.C.”

Chevron posted a series of senior LNG jobs at Kitimat on its job website on Monday.

The Apache Corporation website has a posting for a construction manager for the Kitimat LNG project.

The posting says the job will initially based in Houston, Texas, with the manager coming to Kitimat sometime in the future.

The posting calls for the manager to provide an overall construction plan, co-ordinate and control the construction project from inception to completion aimed at meeting the Project’s requirements in order to produce a functionally and financially viable safe project that will be completed on time within the authorized budget and to the required quality standards.

Some of the job requirements give hints of the project to come:

The site also has a posting for a Contracts and Procurement Manager.

Although Apache and its partners, Encana and EOG Resources now say that they have postponed the final go-ahead decision on the KM LNG project until the fourth quarter of 2012, as negotiations continue with Asian natural gas customers, the postings are indication that the project is progressing.

Robert Matas of the Globe and Mail reports in Crosscheck: Looking for a job in B.C.? that Chilliwack MLA, John Les, parliamentary secretary to BC Premier Christy Clark told an audience in Nanaimo:

Everybody is looking for work around home, but [they] may not be aware that there are jobs available in Kitimat or in Terrace or Fort St. John. That’s not for everybody, but if you’re a young person looking for a job, maybe horizons need to be expanded a bit…

Matas adds in his article:

…up North, the cities are on the cusp of an economic boom, sparked by projects worth $11-billion. The developments are expected to create thousands of new jobs within the next five years.

The list of projects includes a new export terminal near Kitimat for natural gas; modernization of the Rio Tinto Alcan Kitimat smelter; construction of a new 344-kilometre Hydro transmission line that will open up prospects for several more mining properties; a 195-megawatt run-of-river hydroelectric project on Tahltan First Nation lands; and development of a copper and gold property.

The jobs could transform Terrace, a forest-dependent city that has been in a slump since its mills closed down. The mining town of Kitimat has been more stable than Terrace but will also feel the glow from the multibillion-dollar investments in the region…

Editor’s note: One has to wonder why the business media keeps referring to Kitimat as a mining town, since the only mine in the area, the Golden Crown copper and gold venture was abandoned in 1909, more than 100 years ago and Rio Tinto Alcan’s raw material comes from far, far away. (Unless, of course, Matas is referring to some previously unknown revival of the Golden Crown venture is his unnamed copper and gold property)