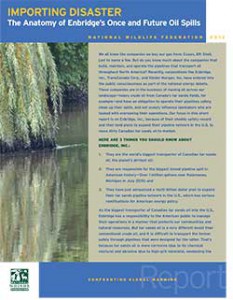 A new US report is slamming Enbridge for its record on oil spills, just as the BC government set out strict new conditions for building pipelines and tanker traffic in the province.

The United States National Wildlife Association issued a report today called Importing Disaster, The Anatomy of Once and Future Oil Spills. (pdf of report at the bottom of this page)

At the same time,  the US Academy of Sciences has opened a new investigation into diluted bitumen.

A letter critical of Enbridge, previously overlooked by the US media is getting new traction, as the anniversary of the Marshall, Michigan, Kalamazoo River spill approaches on July 25.

Enbridge, so far, has not responded to the National Wildlife Federation report.

The environmental group opens the report by saying:

As the biggest transporter of Canadian tarsands oil into the U.S., Enbridge has aresponsibility to the American public to manage their operations in a manner that protects our comm unities and natural resources. But tarsands oil is a very different beast than conventional crude oil, and it is difficult to transport the former safely through pipelines that were designed for the latter. That’s because tarsands oil is more corrosive(due to its chemical mixture)and abrasive(due to high-gritminerals), weakening the pipes to the point  that they are more susceptible t oleaks and ruptures. Remarkably, there are no standards in place to ensure that new pipelines are built, maintained and operated with this fact in mind.

The National Wildlife Association goes on to say:

fossil fuel companies have a ‘stranglehold’ on our political establishment, preventing even modest initiatives that could make our energy safer and cleaner. That lobby strategy keeps in place a system that’s led to 804 spills by Enbridge alone in the last decade, and a total of 6,781,950 gallons of oil spilled in the U.S. and Canada.

“Rather than focus on safety and cleanup, Enbridge is recklessly moving ahead with plans to expand their pipeline network in the Great Lakes region and the Northeast, and to double down on high carbon fuel that is proving nearly impossible to clean from Michigan’s waters,” said Beth Wallace, NWF’s Great Lakes outreach advisor.

NWF’s report recommends comprehensive reforms to break the cycle of spills and pollution that continue to threaten communities and speed global warming.  Among them, the report calls for stronger safety standards that account for increased dangers associated with heavy tar sands oil, increasing investment in clean energy and efficiency, and campaign and lobbying reforms that would put impacted citizens on a level playing field with Big Oil in the halls of Congress.

The NWF report then says:

The Kalamazoo spill may have been a poster child for corporate negligence but it is far from the company’s only black mark. According to Enbridge’s own reports, between 1999 and 2010, they have been responsible for at least 800 spills that have released close to seven million gallons of heavy crude oil into the environment — or approximately half the amount of oil that spilled from the Exxon Valdez in 1989.

Canada has seen its own share of Enbridge heartache, including a 61,000 gallon spill earlier this summer near Elk Point, Alberta.

US media covering the National Wildlife release and looking to the anniversary of the Kalamazoo disaster, are now quoting an overlooked letter from the US advocacy group Public Citizen issued on June 25.

Concerned about Keystone XL pipeline, the advocacy group sent a letter to the Texas House of Representatives, recommending that the state should not wait for US federal rules to prevent tar sands pipeline spills. Public Citizen called the industry’s track record “troubled” and asked the committee to take up legislation that would give Texas broader authority over pipelines.

The committee will examine state regulations governing oil and gas well construction and integrity, as well as pipeline safety and construction, to determine what changes should be made to ensure that the regulations adequately protect the public. Public Citizen will testify in support of stronger rules for the Seaway pipeline (an existing line repurposed to carry tar sands instead of crude oil), the Keystone pipeline (whose southern leg is not yet built) and proposed future tar sands pipelines.

“These companies keep calling it petroleum, but it’s not – these are pipelines of poison,” said Tom “Smitty” Smith, director of Public Citizen’s Texas office.

The media reports on the NWF release are pointing to a new investigation by the US National Academy of Sciences on the safety of diluted bitmenl safety in the United States, that will be part of a report to the US Congress

On June 25, the committee added three industry experts to the panel as there is growing scrutiny over dilbit in the US, which could become an issue in the presidential race.