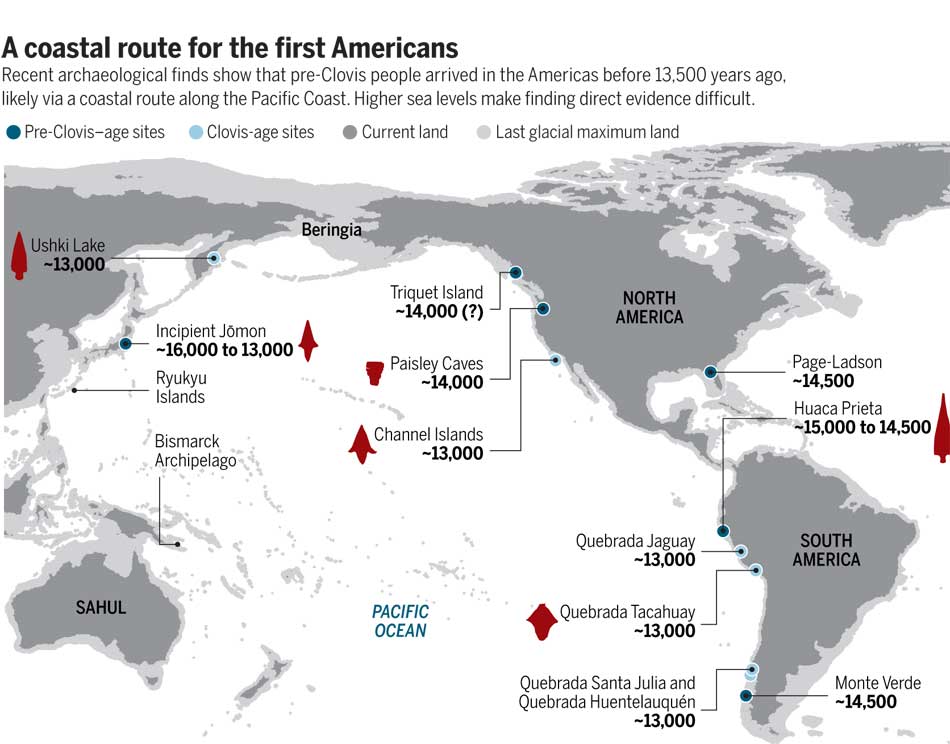 Most historians and archaeologists believe that the First Peoples to arrive in North America came down the West Coast on what they now call the “kelp highway.”

The review paper “The First Americans” was published this week in the prestigious journal Science.

Evidence from archaeological sites from the British Columbia coast to the southern tip of South America show that First Peoples had settled on both continents by at least 18,000 years ago, according to authors T.J. Braje at San Diego State University in San Diego, CA; T.D. Dillehay at Vanderbilt University in Nashville, TN; J.M. Erlandson at University of Oregon in Eugene, OR; R.G. Klein at Stanford University in Stanford, CA; T.C. Rick at National Museum of Natural History, Smithsonian Institution in Washington, DC.

The paper also says the DNA genomic data suggests a northeast Asian origin for Native American ancestors some time in the past 20,000 years.

One of the key sites cited in the paper is Triquet Island in the traditional territory of the Heiltsuk Nation which has been dated to at least 14,000 years ago. Heiltsuk oral history has marked the island for generations, William Housty a member of the Heiltsuk told CBC News at the time the discovery was officially announced in April 2017, “Heiltsuk oral history talks of a strip of land in that area where the excavation took place. It was a place that never froze during the ice age and it was place where our ancestors flocked to for survival.”

The land bridge between northeast Asia and North America, commonly called Beringia, came about when sea levels fell during the last ice age. Although the original Beringia hypothesis has been disputed by some First Peoples, the paper says the Beringia hypothesis is still a factor—but much farther back in time, now about 24,000 years ago.

most archaeologists and other scholars now believe that the earliest Americans followed Pacific Rim shorelines from northeast Asia to Beringia and the Americas.

According to the kelp highway hypothesis, deglaciation of the outer coast of North America’s Pacific Northwest about 17,000 years ago created a possible coastal corridor rich in aquatic and terrestrial resources along the Pacific Coast, with productive kelp forest and estuary  ecosystems at sea level and no major geographic barriers

The paper says that kelp resources extended as far south as Baja California, and then—after a gap in Central America, where productive mangrove and other aquatic habitats were available—picked up again in northern Peru, where the cold, nutrient-rich waters from the Humboldt Current supported kelp forests as far south as Tierra del Fuego.

The other sites cited in the paper are

In an earlier article in Science in August, Knut Fladmark, a professor emeritus of archaeology at Simon Fraser University who was one of the first to propose a coastal migration into the Americas back in 1979, said: “The land-sea interface is one of the richest habitats anywhere in the world,” noting that early Americans knew how to take full advantage of its abundant resources.

Testing the kelp highway hypothesis is challenging, the scientists say, because much of the archaeological evidence would have been submerged by rising seas since the end of the last “glacial maximum,” about 26,500 years ago.

The earlier that the First Peoples arrived, that means the land they originally settled is now the further offshore from the current coast  (land which is now likely also at greater depth under the current ocean). So the review says that finding the evidence means that, “enlarging already vast potential search areas on the submerged continental shelf.”

Although direct evidence of a maritime pre-Clovis dispersal has yet to emerge, recent discoveries confirm that late Pleistocene archaeological sites can be found underwater. Recent discoveries at the Page-Ladson site, in Florida produced 14,500-year-old butchered mastodon bones and chipped stone tools in the bottom of Florida’s Aucilla River.

The report says that “Several multidisciplinary studies are currently mapping and exploring the submerged landscapes of North America’s Pacific and Gulf of Mexico coasts, searching for submerged sites. .

In British Columbia, those studies (pdf) include the discovery by Daryl Fedje, an archaeologist at the University of Victoria and the Hakai Institute of 29 footprints on Quadra Island. A piece of wood embedded in a footprint’s fill provided the radiocarbon date of 13,200 years ago and the spear points lying and a cluster of bear bones at Gaadu Din cave on the Haida Gwaii dated to 12,700 years ago.

The review says that for much of the 20th century, most archaeologists believed humans first colonized the Americas about 13,500 years ago via the overland route that crossed Beringia and followed a long and narrow, mostly ice-free corridor to the vast plains of central North America. There,  according to the earlier theories, Clovis people and their descendants hunted large game and spread rapidly through the New World.

This was initially confirmed by twentieth-century discoveries of distinctive Clovis artifacts throughout North America. Some finds associated with mammoth or mastodon kill sites, supported this “Clovis-first” model.

The early studies decided then that “North America’s coastlines and their rich marine, estuarine, riverine, and terrestrial ecosystems were peripheral to the story of how and when the Americas were first settled by humans.”

Now the recent work along the Pacific coastlines of North and South America has revealed that these environments were settled early and continuously, providing a rich diversity of subsistence options and technological resources for New World hunter-gatherers.

At the moment,  there is little evidence on the coast so far of the kind of  stone tools and fishtail points that had previously provided a road map that archaeologists used to trace the spread of “Clovis” Paleoindians throughout the Americas. Such a roadmap is lacking for “pre-Clovis” sites on the coast.

The problem of finding final proof of the kelp highway is that the First Peoples followed a coastal route from Asia to the Americas, so that finding evidence for their earliest settlements will require careful consideration of the effects of sea level rise and coastal landscape evolution on local and regional archaeological records.

The scientists note that around the globe, evidence for coastal occupations between  about 50,000 and 15,000 years ago are rare because of postglacial sea level rise, marine erosion, and shorelines that have migrated tens or even hundreds of kilometers from their locations at the ice age glacial maximum.

They say overcoming these obstacles requires interdisciplinary research focused on coastal areas with relatively steep offshore bathymetry, formerly glaciated areas where ancient shorelines have not shifted so dramatically, or the submerged landscapes that are one of the last frontiers for archaeology in the Americas