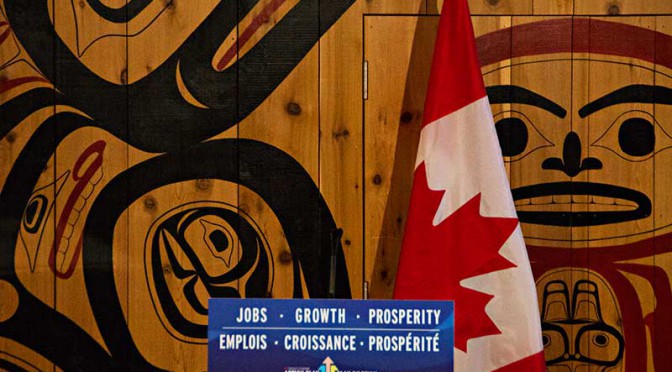 If anyone wanted a snapshot (or for younger folks a selfie) of why the Harper government grounded out at home, never even getting to first base  with northwestern British Columbia on Northern Gateway and other resource projects, it can be found in about sixty pages of  documents, obtained by Northwest Coast Energy News under the Access to Information Act, documents that outline the planning for former Natural Resources Minister Joe Oliver’s first visit to Terrace in March 2013

When Natural Resources Canada started planning Joe Oliver’s announcement they created what was called a “Message Event Proposal” which even in its title shows how the government and the communications staff think. The message is more important than the event.

The planning documents from Natural Resources, starting on March 5, 2013, indicate that from the beginning the announcement was being treated as a photo op. Invitations to or participation by “stakeholders” are listed as N/A “not applicable,” which meant that meetings, even private meetings, with representatives of northwestern First Nations and other communities either weren’t considered or the communications staff weren’t informed. (If there were such plans they were not part of the access documents released and as far as Northwest Coast Energy News can find out no meetings took place since Oliver left for Ottawa immediately after the announcement)

The Natural Resources communications staff were working on multiple angles in March, as part of what the planning documents call “a suite of events in Vancouver on marine and pipeline safety.”

The first set of those events would eventually take place on March 18, 2013, in Vancouver, and included the announcement, without consulting either Rio Tinto Alcan or the District, that Kitimat’s private port run by Alcan since it was first built would be turned in a federal public port.

The announcement of Eyford’s appointment  would eventually take place at the Waap Galts’ap community long house at Northwest Community College in Terrace on the morning of March 19.

That location certainly wasn’t clear at first. The first documents suggested the announcement take place in Vancouver, and then a day later on March 6, the proposed venue, according to the staff, was in either Prince Rupert or Prince George.

According to the internal e-mails, sometime that week what Ottawa bureaucrats call MINO — the minister’s office– decided that the venue should be Terrace. On March 11, e-mails among Natural Resources staff show that the choice had changed to either Terrace or Prince George.

Since the “special representative” whom we now know would be Douglas Eyford, would report directly to Prime Minister Stephen Harper, the political level was involved.  MINO took over writing Oliver’s speech and the arrangements were copied to the Privy Council Office, the civil service branch that has overall supervision of the federal bureaucrats and works directly with the Prime Minister. So the speech that the communications branch had drafted for Oliver became “can please turn the one we had done for him into the remarks for the new guy?”

Plan B in Prince George

The communications officer replied with three locations at the University of Northern British Columbia “a moving bear totem on campus” the main administration building which the e-mail said “ has a strong First Nations focus,” adding  “Environment Canada has done…events there. Strong FN visuals.” The third choice was “a new bio energy facility that looks industrial.”

Backups were The College of New Caledonia trade centre and the Prince George industrial park.

E-mails from the staff on Wednesday, March 14 and Thursday, March 15, showed while they were now aware the event would be in Terrace, and probably at Northwest Community College, there was still a lot of uncertainty. “We haven’t been able to contact them to confirm, but as soon as we do, we will let you know the exact details as well as what is required in terms of logistics.”

Remembering that Natural Resources and Transport Canada were also planning the Vancouver event on Monday, March 18, it appears that even as Oliver arrived on the morning of March 19, the minister’s staff both political and bureaucratic were still scrambling.

On March 19, the NWCC staff on site were complaining that as soon as the Ottawa delegation saw the standard arrangements for an event at the Waap Galts’ap community long house they ordered the NWCC staff to immediately rearrange the room, so that the podium was in front of one wall with what Oliver’s staff thought was a better First Nations painting. That rearranging was still going on when I arrived to cover the announcement.

Even after the furniture was rearranged, the start was delayed as Oliver and his staff disappeared into an upstairs room for a meeting before the news conference began, and Oliver announced Eyford’s appointment.

During the question and answer session with the media during the news conference, the students that had essentially been brought in as props for the photo op and to help promote Northwest Community College’s industrial training program, began to ask questions.

One student asked Oliver if Eyford’s appointment was going to replace “all talks” with First Nations about resource projects. The Natural Resources public relations staff tried to cut off one student, since the national media were waiting on a telephone conference call. To his credit, Oliver did answer the student’s question, saying Eyford’s appointment was not intended to “replace the independent, regulatory review.” He went on to explain the Northern Gateway Joint Review would continue its work and report at the end of 2013.

What was Ottawa thinking? You too, can respond to an oil spill.

If the aim was to engage the First Nations and other residents of northwestern BC, it is clear that the concerns of this region hadn’t reached out Ottawa.

It appears from the planning documents for Joe Oliver’s trip to Terrace, that a main concern of everyone in the northwest, aboriginal and non-aboriginal, opponents and supporters of the Northern Gateway pipeline, preventing oil spills also wasn’t on the government radar, rather it was preparing and responding to oil spills.

Guess who would respond?

As part of the measures to strengthen Canada’s Marine Oil Spill Preparedness and Response Regime, the Government of Canada will strengthen the engagement and involvement of Aboriginal and non-aboriginal communities in preparing for and responding to oil spills.

When it comes to a key section on benefits from the Northern Gateway and other resource projects, there is no mention of benefits to British Columbia; rather it appears all the examples of benefits for aboriginal communities come from Alberta, including $1.3 billion in contract work for oil sands companies not including construction, for the year 2010, and $5 billion since 2001. The Message Event Proposal also cites a joint venture between the Bigstone Cree and Bronco Energy, “the biggest oil sands project every undertaken on First Nations reserve lands.”

Overall the plan was to “Promote Canada’s commitment to achieving its goals under its plan for Responsible Resource Development, including increased consultations with Aboriginal peoples.”

The “media lines’ issued by Natural Resources also outlined the Harper government’s attitude to the Northern Gateway, noting that Eyford’s appointment was independent of the Northern Gateway Joint Review, and went to indicate that the JRP was “conducting a rigorous, extensive, open, science-based assessment.” It adds that “we will continue to rely on the integrity of this process,” again showing how out of touch Natural Resources was (at least in talking points) since by March 2013, there was growing consensus in the northwest that the JRP had lost its credibility.

When Eyford presented his report to the Prime Minister in December, 2013, Eyford called for stronger action to engage First Nations opposed to new oil and gas pipelines.

“It’s never too late to engage and do so in a process of good faith negotiations… “This won’t be an easy process. I hope my report is perceived as providing objective and blunt advice to all the parties engaged in this process.’’

The 53 page report contained dozens of recommendations mainly concerned with a more open and principled dialogue with First Nations.

“The development of West Coast energy infrastructure provides an opportunity to forge partnerships and build relationships. There is a strong interest and real opportunity for Canada and aboriginal Canadians to more effectively collaborate to address their respective interests.’’

Editor’s note:  On the port issue, an RTA spokesperson noted that talks with the federal government are continuing. He noted that all the Kitimat port facilities are privately owned, by Rio Tinto Alcan or by LNG Canada and there are “multiple stakeholders” involved.

Joe Oliver, the Minister of Natural Resources, has confirmed that the federal government intends to make Kitimat a public port.

Oliver was in Terrace, March 19, 2013, to announce the appointment of Vancouver lawyer Douglas Eyford as “Special Federal Representative on West Coast Energy Infrastructure.” Eyford’s job will be to “engage aboriginal communities in British Columbia and Alberta that are most likely to have an interest in West Coast energy infrastructure.”

Oliver was asked to confirm statements on the Transport Canada website that Kitimat would become a public port.

Oliver replied: “The news release was accurate. What the purpose is to make sure that the absolute highest standards of marine safety apply in the port of Kitimat. And we have as I announced yesterday and I had spoken about before at the port of Vancouver we have an extremely robust marine safety regime in place but we want to make sure that as resource development continues and as technology improves, we are at the world class level. As I also mentioned there has never been off the coast of British Columbia a major tanker spill and we want to keep that perfect record.”

No visit to Kitimat

Oliver was also asked if he intended to visit Kitimat during his visit to the northwest (Kitimat is a 40 minute drive from Terrace).  Oliver replied, “Not in this particular visit, I have to get back [to Ottawa] There’s a budget coming and I have to be in the House for that but I certainly expect to be going up there.”

The federal budget will be released on Thursday.

At Monday’s meeting of District of Kitimat council, some members quietly expressed frustration, to say the least, that Oliver, the man responsible for pushing the Northern Gateway pipeline through British Columbia to Kitimat had not bothered to include the town in his visit to the northwest.

Members of the District of Kitimat council, which on paper at least, is responsible for the port of Kitimat (even though it is really run by Rio Tinto Alcan) also expressed frustration that no one in Ottawa gave the council advance notice of the government decision to take the port public.

Asked for comment on Oliver’s statement, Rio Tinto Alcan officials in Kitimat also seemed unaware of the government announcement and promised a statement in the near future.

Oliver’s announcement in Vancouver Monday about a “world class” marine safety system and today’s announcement about the appointment of Douglas Eyford, appear to be a campaign by the Harper government to establish a stake in the middle ground in the pipeline debates, in hopes of undermining the opponents of the projects.

“The primary concern with the appointment, Cullen said, is that Mr. Eyford will report to the Prime Minister, not to Parliament or the public. “So, if Mr. Eyford’s report is in any way unfavourable to the Conservative pipeline agenda, what assurances do we have that his report will make its way into the public eye?

“It is also unclear how the appointment would affect Eyford’s work as the chief government negotiator for the federal government’s comprehensive land claims process, and what kind of effect his absence will have on that process.”