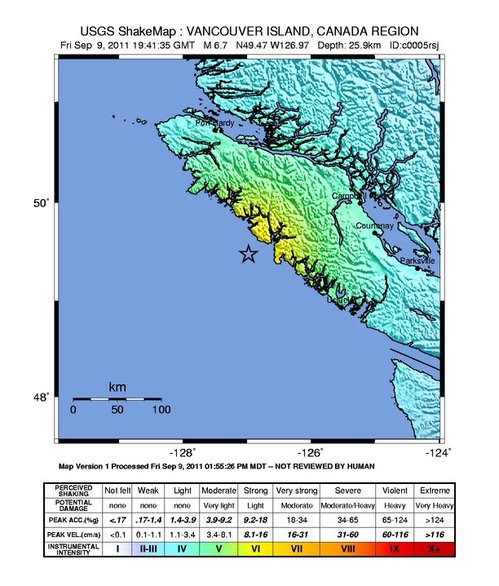 A 6.4  magnitude earthquake struck off the west coast of Vancouver Island at 12:41 PM PT, Friday, Sept. 9, 2011.  Iniitial reports say there were was no damage or injuries. The US Geological Survey first set the magnitude at 6.7, but that was later revised to 6.4  A 6.4  magnitude is considered a major earthquake.  The quake was not felt in the Kitimat region but was in Vancouver Island towns like Campbell River, Port Alice and Port Hardy.  In the small village of Zeballos, residents gathered quickly at an emergency gathering point, but it was soon clear that danger had passed and there were no injuries. Shaking was felt in Vancouver and Victoria, as far south as Seattle and east to Abbotsford.

US Geological Survey page on the Vancouver Island earthquake.

The West Coast and Alaska Tsunami Warning Centre has not issued a tsunami alert.

A strong earthquake has occurred, but a tsunami IS NOT expected along the California, Oregon, Washington, British Columbia, or Alaska coast. NO tsunami warning, watch or advisory is in effect for these areas.

Based on the earthquake magnitude, location and historic tsunami records, a damaging tsunami IS NOT expected along the California, Oregon, Washington, British Columbia, and Alaska coasts. Some of these areas may experience non-damaging sea level changes. At coastal locations which have experienced strong ground shaking, local tsunamis are possible due to underwater landslides. 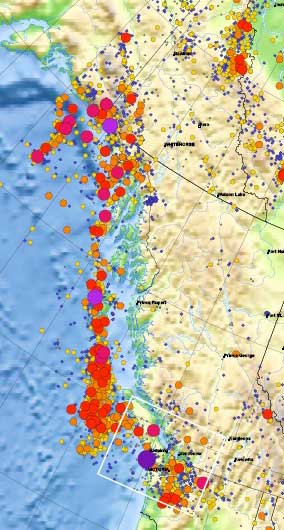 This detail of the Natural Resources Canada/ Earthquakes Canada shows the historical record of earthquakes along the northwest coast of British Columbia. The larger the circle, the greater the magnitude.

Most, not all, the earthquakes took place in the tetonic plate boundaries off the coast in the middle of the Pacfic Ocean, although the map does also show quakes on Haidi Gwaii. However, large quakes can be felt far inland.  The magnitude 9.2 Good Friday earthquake in Alaska in 1964 did shake the town of Kitimat.

Loss of Coast Guard cutters brings supertankers to the forefront

But Vancouver Island North MP John Duncan, who referred to the replacement boats as “less capable” in the past, continues to support replacement of the Point Race and Point Henry this week.

The 47-foot motor lifeboat CCGS Cape Palmerston is to be officially named and dedicated to service in Campbell River next Thursday, replacing the 70-foot Point Race. Ceremonies to replace Prince Rupert’s Point Henry with the CCGS Cape Dauphin are slated for July 26.