Photogallery. For full screen mode with captions, click on the box to the right of the bottom menu bar.

The long, magnificent fjord known as Douglas Channel was carved by a glacier thousands of years ago, some of the islands are rock uplifted by tectonic forces, others piled up by retreating glaciers.

So far, since I returned to Kitimat, I have had few chances to “go down the Channel,”  as the people of Kitimat say.

Of course, when I do go,  I always have a camera with me, even in the roughest weather–and the Channel can be rough most of the year.

It is in these waters that the energy industry, both the Enbridge Northern Gateway and the Liquefied Natural Gas projects want to use supertankers to send their products to markets in Asia. Many of the photographers who come to Douglas Channel in high summer choose to capture the brilliant colours of ocean, forest and mountain, as I have on several assignments.

For this gallery, I have chosen to use black and white to show the stark beauty of the mountains, the often menacing seas and the clouds, ever changing, as the westerly winds from the Pacific drive those clouds against the mountains.

Images from this gallery are available for purchase for personal, editorial and commercial  use on Photoshelter. Simply click on the image above.

The grounding of a ship off Christmas Island, an Australian territory, is turning into an environmental disaster, according to local news reports.

A Panama-flagged cargo ship carrying phosphate, the MV Tycoon split in two at Flying Fish Cove off Christmas Island Sunday afternoon. Local authorities say a huge swell ripped the ship from its moorings. Experts warned that the spill was a potential disaster for the ecologically important area, with crabs, birds and coral all threatened.

The MV Tycoon broke up just hours after the container Rena broke up off New Zealand. 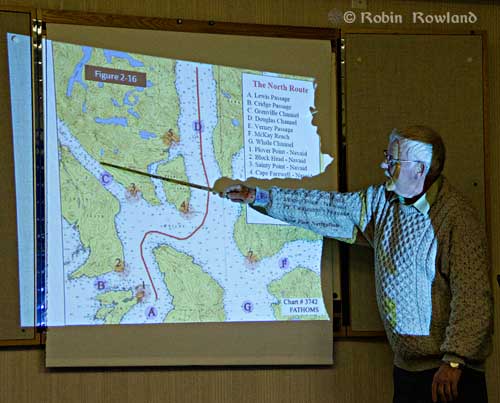 Documents obtained by CBC News say there are major cuts coming to DFO and the Canadian Coast Guard.

Fisheries and Oceans to ‘shed’ services

Employees of the federal Department of Fisheries and Oceans were told Wednesday their employer will soon be significantly smaller, and responsible for fewer things.

DFO also warned its workers that some of them will definitely not be working there once the department completes a $56.8-million budget-cutting plan by 2014.

“More savings are expected in the future,” said a letter signed by Deputy Minister Claire Dansereau and two other top officials.

The letter and supporting documents, which were obtained by CBC News, say reductions are part of a “dynamic change agenda,” and will apply broadly to services that include the Canadian Coast Guard.

Along the fjord known as the Douglas Channel in northwestern B.C., the winds are at gale force as Rick Thompson, the owner-operator of a floating fish lodge called the Tookus Inn, sets off from Kitimat harbour to close up for the season. Like many in his industry, he has poured much time and energy into building his outfitting business and he’s frustrated by staffing problems and the fact that guides seem to have fallen off the map when it comes to government support.

The English-language website of one the world’s major Arab-language satellite television networks  Al Arabiya, has turned its eye on Kitimat, the Northern Gateway pipeline and the repeated claim by the Conservative government that Canada is an “energy super power.”

The article:  Canada: Energy Superpower?  is an analysis by Mary E. Stonaker, described as “an independent scholar, most recently with the Middle East Institute, National University of Singapore.” Stonaker puts Canada’s energy policy, including the pipelines to Kitimat, in a world wide perspective, summing up the story for  Saudi-owned Al Arabiya‘s main audience in the oil-rich Middle East. It doesn’t just look at oil and gas energy, but hydro, solar and wind.

“Northern Gateway” has yet to be fully hatched though it is encouraging to see Canada expand its partnerships beyond its southern neighbor especially during the recent economic downturn. Relying too heavily on one consumer, no matter who that consumer may be, is setting up an extremely weak energy security strategy.