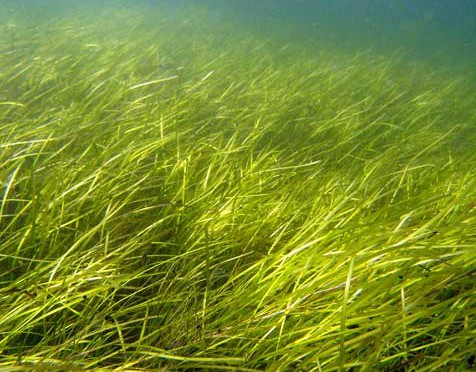 Eel grass is not a seaweed but a flowering plant that migrated to the sea, say scientists who have now mapped the eel grass genome. The study also shows that eel grass ( Zostera marina) is crucial in absorbing carbon dioxide in the soft sediments of the coasts.

Eel grasses form a carbon dioxide sink: “they store more carbon than tropical forests,” says Jeanine Olsen of the University of Groningen in the Netherlands who led the study.

Coastal sea grass ecosystems cover some 200,000 square kilometers, the study says. Those ecosystems account for an estimated 15 per cent of carbon fixed in global ocean, and also impact sulphur and nitrogen cycles.

The scientists argue that since sea grasses are the only flowering plants to have returned to the sea that is the most extreme adaptation a terrestrial (or even freshwater) species can undergo.

The science team says the Zostera marina genome is “an exceptional resource that supports a wide range of research themes, from the adaptation of marine ecosystems under climate warming and its role in carbon burial to unraveling the mechanisms of salinity tolerance that may further inform the assisted breeding of crop plants.”

Sea grasses form the backbone of one of the most productive and biodiverse ecosystems on Earth, rivaling coral reefs and rain forests in terms of the ecosystem services they provide to humans.

Sea grass meadows are part of the soft-sediment coastal ecosystems found in all continents, with the exception of Antarctica. They not only form a nursery for young fish and other organisms, but also protect the coastline from erosion and maintain water clarity. ‘

The study, which sequenced the genome of the eel grass taken from the Archipelago Sea off Finland. published today, in the journal Nature, is the work of an international consortium of 35 labs, most of them in Europe, working with researchers from the U.S. Department of Energy Joint Genome Institute.

The study showed that eel grasses are completely submerged marine flowering plants, called by science angiosperms. It shows that eel grass is a member of the ancient monocot family.

The monocots include about 60,000 species, flowering plants that first appear above the soil as a single leaf. They include orchids, “true grasses,” as well as rice, wheat, maize and “forage grasses” such as  sugar cane, and the bamboos. According to Wikipedia, other economically important monocot crops include  palms  bananas , gingers, onions, garlic, lilies, daffodils,  irises, amaryllis,  bluebells and tulips.

Zostera marina is the first marine flowering plant have its genome fully sequenced. As well as finding the eel grass’s genetic ancestors the researchers were interested in understanding how the plant–and by extension other plants in the ecosystem–adapt to climate change.

As it adapted to  an underwater, coastal lifestyle, eel grass gained genes that allowed it to live in saltwater but lost genes involved in traits associated with land-based plants.

Olsen called this “arguably the most extreme adaptation a terrestrial (and even a freshwater) species can undergo.”

What she describes as the “use it, lose it, or change it” scenario, eelgrass modified its cell walls. The eel grass cell wall is very different from normal plant cell walls and more like that of sea algae, similar to the cell in seaweeds. The eel grass has lost genes associated with light-sensing, pollination and regulation of internal water balance.

Eel grass lost its stomata (which are used by land plants to ‘breathe’) but also all of the genes involved in stomatal differentiation. “The genes have just gone, so there’s no way back to land for sea grass,” Olsen says. Sex is entirely underwater involving long naked sperm filaments especially adapted for underwater fertilization of the tiny flowers.

The team compared the eel grass genome to duck weed, one of the simplest flowering plants and Zostera marina’s closest sequenced relative. They noted differences in genes related to cell wall structure due to adaptations to freshwater or terrestrial conditions. For example, plants such as duckweed have seemingly lost genes that help plants retain water in the cell wall, while eel grass has regained these genes to better deal with osmotic stress at low tide.

“They have re-engineered themselves,” said Olsen of the changes affecting the eelgrass cell walls. “Crop breeders may benefit from lessons on how salt tolerance has evolved in these plants.”

With Zostera marina meadows stretching from Alaska to Baja California, and from the White Sea to southern Portugal, Olsen noted that these ecosystems afford researchers “a natural experiment to investigate rapid adaptation to warmer or colder waters, as well as to salinity tolerance, ocean acidification and light.”

Jeremy Schmutz, head of the US Department of Energy’s genetic plant program, emphasized that while eel grasses are key players in coastal marine ecosystem functions and considered the “lungs of the sea,” they are also endangered. “There are estimates that nearly a third of the eel grass meadows worldwide have been destroyed by runoff into the ocean,” he said, “reducing their potential capabilities as carbon sinks. Thus, studying the adaptive capacity of eel grass is urgent to assist conservation efforts.”

An overarching question for Olsen’s team is how quickly eel grass can adapt to rapid climate change. The fact that Zostera marina grows along the coastline from Portugal to Scandinavia is being used as a natural experiment to investigate adaptation to warmer or colder water, as well as to salinity, ocean acidification and light.

A University of Washington study says that using trees from the northwest as a building material is good for carbon mitigation in the atmosphere, especially if the wood waste is also used as a biofuel to replace gasoline and other fossil fuels.

The article, published in the journal Forests, says that if timber from northwestern U.S. forests were harvested sustainably every 45 years and the wood used as a building material, where possible replacing substances like concrete or steel, which require greater amounts of fossil fuels to manufacture, that would both remove existing carbon dioxide from the air while the forest was growing and then keep the gas entering the atmosphere for years  as long as it is part of a building.

It says carbon savings can be increased by using the parts of the trees
not suitable for building materials such as slash, branches and debris
as biofuel, especially ethanol.

It also notes that some forest “residual” may be too
difficult to collect to be used a biofuel or should be left to maintain
the forest ecosystem.

The lead author of the study,  Bruce Lippke, professor emeritus of forest resources at the University of Washington, says, “When it comes  to keeping carbon dioxide out of the atmosphere, it makes more sense to use trees to recycle as much carbon  as we can and offset  the burning of fossil fuels than it does to store carbon in standing forests and continuing burning fossil fuels.”

The University of Washington says this is the first study to look at using biofuels in addition to  using wood from long living trees as a building material, as opposed to woody biofuels studied in isolation.

The study also looked at forests in the U.S. Northeast and Southeast, and emphasized that different regions will produce different results.

It suggests that using fast growing species, such as willow, especially in the US Southeast, could have advantages.  Willow, while not usually a commercial building wood species, and with a lower carbon conversion efficiency, when used as biofuel can be both economically harvested for biofuel because of its high growth rate and that rapid growth would also be absorbing carbon dioxide from the atmosphere.

Lipke says that properly managed forests mean using wood for both building and bioenergy  is carbon neutral. That’s because the growing trees could absorb enough carbon dioxide to offset emissions from the rotting wood from used building materials after its useful life and from cars using ethanol produced from woody debris.

The biggest problem, the study suggests, is the still relatively low cost of fossil fuels,  and the low cost of  natural gas, which has made large scale conversion of wood biomass to ethanol, so far, uneconomic.

It also notes that the entire forest should be considered in any equations on carbon mitigation because it would include different lifecycles, quality of wood and different collection and manufacturing processes.

Carbon captured in building wood has a half life of 80 years  after harvest.  Then  there is a question of what should happen to that wood after its useful life, thus wood that is burned would add carbon dioxide to the atmosphere, whereas it would be better to either put the wood into landfill so it can rot or that the wood  be processed in some kind of energy recapture process.

Combined use of good wood in building and waste for ethanol, while sustaining the forest, would mean that 4.6 tonnes of carbon are captured per year for each hectare of forest. The study says “this sustainable mitigation from using wood products  and biofuels has the potential to exceed  the growth rate in forest carbon  because of the high leverage  when wood substitutes for fossil intensive  products and their emissions.”

The study also looks at ways the sustainable forest and use of biofuels could increase American energy independence.

Editor’s note: There should be a follow-up Canadian study that looks at the carbon cost of sending raw logs to China in ships burning high carbon bunker oils, rather than finding new ways of producing lumber here, and as the study suggests, using the lumber, where possible,  to replace steel and concrete.