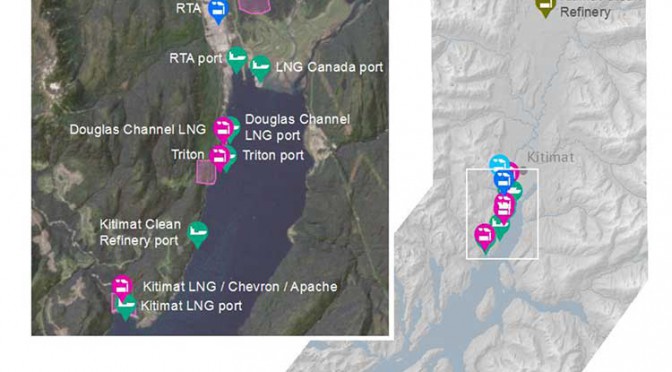 The Kitimat Airshed Assessment looked at the cumulative effects of industrial air emissions, primarily sulphur and nitrogen oxides, and their potential impacts on both human health and the environment from

The study was divided into two zones.

There was one big factor missing from the study, it does not include the Enbridge Northern Gateway project, although the consultants who did the study do cite a couple of the air quality studies that Enbridge filed with the Northern Gateway Joint Review Panel. That despite the fact the Joint Review Panel under Condition 82 required that Enbridge file with the NEB for approval, at least four months prior to commencing construction, “an Air Quality Emissions Management and Soil Monitoring Plan for the Kitimat Terminal.”

The map from the airshed study also shows that the  possible marine terminal for David Black’s proposed Kitimat Clean refinery project is at or close to where the proposed Enbridge Northern Gateway terminal would be. 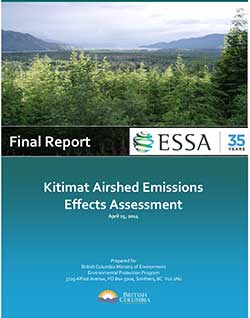 The study looked at proposed emission levels and the effect of emissions elsewhere in the world and then compared those studies with the Kitimat Valley. It found that the risk of sulphur dioxide was “directly related to proximity to industrial area”–largely the Kitimat Service Centre area–and that there would be a minor increase in respiratory incidents of 0.5 per cent to 2 per cent, with a slight increase of nitrogen dioxide but those were within existing guidelines.

As for environmental impact, the study says nitrogen dioxide impacts will be low. There wil be “some increased risk of soil impacts” from sulphur dioxide. The study says there will be “no negative impacts to vegetation across all scenarios” but did find “potential for acidification” of seven small lakes.  Lakelese Lake is not one of those affected.

The study also doesn’t include particulate matter and although it does consider climate change, did not take into consideration possible increase of green house gases in the Kitimat Valley.

The consultants, Esssa Technologies of Vancouver, based its findings on an earlier study by Rio Tinto Alcan on emissions from the Kitimat Modernization Project and worked on those findings by adding new industries and a greater area to the models they used.

The province and industry says they will continue to monitor air, water, soil and vegetation “to ensure these values are protected.”

The higher levels of sulphur dioxide emissions from the Rio Tinto Alcan Kitimat Mondernization Project will be allowed to continue under the current permit. Environment Minister Mary Polack told reporters that will only change if the current court challenge to the sulphur dioxide levels are successful.

Two of the maps filed by the LNG Canada project with provincial and federal environmental assessment agencies look at the air quality problems from the project, including the controversial prospect of cumulative problems from multiple industrial projects in the Kitimat Valley, one of them the RTA Kitimat Modernization Project which will increase sulphur dioxide emissions while decreasing some other emissions.

One map covers what is being called the airshed, in the case of LNG Canada, air quality will be assessed with the LNG facility at its centre. A second map covers the tanker route, and as well as a 40 km square grid around the plant that will also assess Hartley Bay, Kitkatla and Metalkatia which may be impacted by vessel emissions.

As well as scientific data, the assessment will also take into consideration traditional knowledge and traditional use from “aboriginal and other groups.”

The possible cumulative effect on the air quality in the Kitimat valley and surrounding areas has prompted the BC government to commission its own study of the Kitimat airshed.
On Oct 3, the provincial ministries of the environment and gas development announced a $650,000 scientific study “to help inform regulatory and policy development for future industrial activity in the Kitimat area. The goal is to ensure the potential impacts from industrial air emissions are clearly understood prior to new projects being approved and in operation.”
It says

The Kitimat Airshed Impact Assessment Project will look at the cumulative effects of existing and proposed industrial air emissions in the airshed. These include emissions from: an existing aluminium smelter, three proposed LNG terminals, a proposed oil refinery, a crude-oil export facility, and gas-turbine-powered electrical generation facilities. The study will focus on sulphur dioxide and nitrogen dioxide emissions from these facilities.

The study will assess the impact of emissions through a number of scenarios, including their potential effects on water and soil, as well as on vegetation and human health from direct exposure.

BC defines an airshed as

An airshed is generally described as an area where the movement of air (and, therefore, air pollutants) can be hindered by local geographical features such as mountains, and by weather conditions. The most obvious example in British Columbia is a mountain valley. Since air pollution knows no political boundaries, airshed activities may be focused on a single community or on a number of neighbouring communities faced with similar air quality problems and requiring similar action.

The LNG Canada assessment will look at two potential adverse effects, first a change in ambient air quality in the Kitimat airshed or along the marine access route and second any change in acidic deposition pattern in the Kitimat Valley.

The assessment will also study possible cumulative effects on air quality of multiple projects and those projects over time.